How to find jobs that aren't advertised

Some jobs are offered to people already known to the recruiters without being advertised, so if you are job hunting it makes sense to build up your network of contacts.

There are two ways of doing this: face-to-face networking and digital networking.

You’ll already have your own network of friends, family, academics and previous employers, but you can always do more to build up your network. Effective networking increases your chances of hearing about vacancies, and boosts your knowledge of the labour market.

Here are some suggestions to get you started:

Approach people politely and professionally: don’t ask for jobs straight away, and keep in touch afterwards to maintain your connection

Digital networking can work in the same way as face-to-face networking, but is done purely online through social media and internet forums.

Advantages of networking digitally as well as face-to-face include:

Once you have connected with a potential employer, many will ‘Google’ you to check out your digital profile and may even assess you as a potential candidate. Make sure the impression employers get is a positive one – keep your digital footprint clean and professional, set your privacy settings and do a regular internet search on your name (while logged out of your social media accounts) to check what comes up. Some employers, such as media and marketing will expect to see that you have an active social media presence.

Employers are usually impressed by:

LinkedIn is the key global professional social media platform with a focus on companies, employees and businesses linking with people for business purposes. Currently there are more than 722 million members at October 2020, including more than 30 million in the UK, with students and graduates the fastest growing demographic.

How can LinkedIn help me in my job hunt?

With LinkedIn, you can:

How do I get started?

Download our LinkedIn Building Your Profile factsheet (below) for full details.

Start by building your professional profile as fully as possible and aim for a 100% completed profile so you appear in more searches. It might take a while to achieve this, but it is worth the effort. 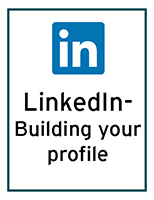 Information and advice for new users to get the most out of your LinkedIn Profile .

If you require this information in an alternative format, please contact our team. You can also read our Website Accessibility Statement.

Facebook is a social networking site in which you create a profile to keep in touch with friends and family. You can share photos and updates with people you’re connected to. It can also be used to find out about job opportunities, and for careers research.

How can Facebook help me in my job hunt?

Like and subscribe: you’ll find that the vast majority of companies are on Facebook. Use the search facility to find companies in the field you are looking to enter, industry experts, job sites, recruiters, graduate / placement specialists, alumni groups, and careers specialists. Be aware that there will often be multiple pages for a large company, so make sure you double- check the details.

Check your privacy settings: anyone can potentially see the content you post on Facebook, including your photos, statuses, and what you have ‘liked’. Allowing third party applications access to your profile also grants the company behind the app access to your information. So keep it professional, monitor your privacy settings, and be careful as many employers will check your social media profiles before they proceed with your application.

Keep your profile up to date and truthful: remember, your details can also be seen on other social networking sites.

Be proactive: network by updating your profile and status to tell people what kind of job role you are seeking. ‘Like’ company Facebook pages and consider involving yourself in online communities by commenting and asking questions.

Career and Employability Services run workshops and interactive labs throughout the year on getting the most out of social media- see the schedule and reserve your place online.

Twitter is a social networking site which allows you to post and view messages of up to 280 characters, called tweets, to those you connect with. You don’t have to tweet yourself, as you can just follow to begin with.

How can Twitter help me in my job hunt?

Following: this means that you subscribe to other users’ tweets, which will appear in the timeline on your home page.

Tweet: tell people where you are and what you’re doing (if interesting), post photos, video and links.

Retweet (RT): share other users’ tweets with your followers.

@Replies / Mentions: reply to other users’ tweets or mention them by username in your tweet.

Like: bookmark tweets that you liked or that included useful content / links (these are saved on your profile page).

Twitter Search: use the search bar to find other users, or topics they are tweeting about.

Hashtags: mark relevant keywords with a #. This categorises tweets so that they can more easily be found in Twitter searches. By clicking on a hashtagged word you can see all other tweets in that category.

Lists: you can group other users into a list. When viewed the list shows a stream of the tweets from users included in the group. You don’t need to be following the users to add them to the list, and you can follow lists created by other people.

Keep it professional: if you plan to use Twitter for job hunting, use a professional head-and-shoulders photo and find people and organisations in your chosen career area to follow. Think about the content that you post, and its tone. You can set your account to ‘protected’, but you may miss out this way, as others can’t see the good content you’ve posted.

Tweet and retweet: join conversations, pose questions and retweet interesting professionally-relevant content to display your pro-active interest in the area.

Communicate: reach out to employers by engaging in discussions as above, but tailor your interactions according to the tone of those you’re replying to. Thank others for posting interesting content and respond to questions as well as posing them. Post links to relevant articles with thoughtful comments to show you’re engaged with your field.

Could I use any other social media platforms for job hunting?

Here are some more types of social media platforms, along with how they could be useful in improving your online visibility:

If you'd like to discuss social or digital networking and jobseeking with us, please book an appointment online or find us in Student Central.

We also run careers workshops about social media throughout the year including our LinkedIn Labs which offer practical help to improve your profile. Check out our workshop schedule and reserve your place.