University signs up to Football for Peace initiative 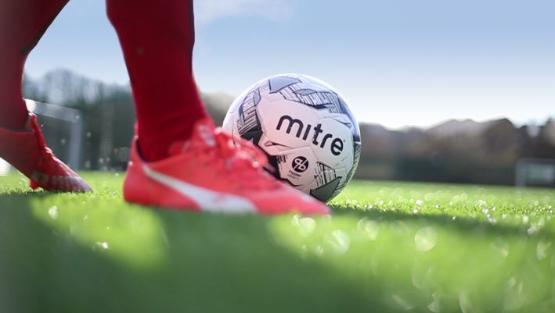 The world’s media converged on Bradford yesterday (Wednesday October 6) for the launch of the UK’s first Mesut Ozil Development Centre.

The University of Bradford has partnered with Football for Peace and Bradford City AFC to deliver on the programme, which will see teams of youngsters use University football pitches and enrol on a certificated course.

The idea is to use football as a means of promoting equality, diversity and inclusion and to give young people inspiring role models and skills such as conflict resolution that they can use in later life.

During the ceremony, Prof Congdon said: “The Football for Peace initiative is fundamentally aligned to our values of inclusion and diversity. It’s important for young people to have inspirational role models like Mesut Ozil, so they can realise their own potential.

“Our vision is a world of inclusion and opportunity where people want to and can make a difference, and we want to be the place to make that happen.”

Football for Peace is a philanthropic organisation which utilises the unique power of football to deliver global social change. It also raises awareness of pressing social and environmental issues in line with the United Nations’ Sustainable Development Goals.

The new Mesut Ozil Development Centre (sponsored by Innaree) at the University of Bradford, will also see the creation of a new certificated course for young people.

Brian Mitchell, Assistant Professor in the Faculty of Management, Law & Social Sciences, said: “Football for Peace fits really well with every single agenda we have. Football feels like it’s grown up a little bit - we now have players who are not just footballers but agents for change. Grass roots is where it starts, with young people, supported to play football but in this instance, learning about responsible citizenship.”

Kash Siddiqi said: “Today is such a humbling milestone for me… launching our inaugural centre. We will be bringing this initiative to places like London and Birmingham but for me, it’s really important that we launch it here in the North, in Bradford, where there is a diverse population.”

Football for Peace is backed by the Football Association and Sporting Equals, which promotes ethnic diversity across sport and physical activity and aims to showcase the power of football to promote sustainable living and contribute positively to pressing issues of wellbeing, isolation, inequality, and discrimination.

The Mesut Ozil Development Centre will be open to all youngsters but with a particular emphasis on encouraging those of South Asian background to get involved.

Mesut Ozil Said: "I have always been surprised why the South Asian community are only allowed to be fans of the game. Why are we not seeing more players or managers breaking into professional football? I want to promote them, give them an opportunity to be successful both on and off the pitch. I myself am from a ethnic diverse background and understand the challenges. I hope the Football for Peace Mesut Ozil Centre will become the platform they need.”

The University’s certificated course is being developed by Emeritus Professor Tom Woodhouse from Peace Studies and Brian Mitchell, lecturer in social work, and is designed to promote skills in peacebuilding and social justice.

They will be working closely with Ikram Butt, who is a former Rugby League player and the local coordinator for Football for Peace.

Emeritus Prof Tom Woodhouse, who is co-designing the certificated module children will take as part of the Football for Peace initiative, said: “Football brings people together. A lot of clubs are now doing a lot of work in terms of developing communities, protecting vulnerable people, social inclusion. I recognise this as a wonderful opportunity.”

Football agent Dr Erkut Sögüt, who flew in from Turkey for the event, said: “We have done lots of work in the last weeks and months and we have made this happen. This project is about making others better. I grew up as an immigrant in Germany - when I was younger, I always thought being an immigrant was a disadvantage. I came from a different background, I spoke a different language. But later in life I realised, it was actually the biggest advantage I could have. We speak two languages, we have two cultures, we are enriched with so many things, so I changed it into being an advantage and I’m proud of that - I realised I actually started 2-nil up and no 1-nil down. That’s what I want to give to the young people.”