Bradford named UK’s University of the Year for Social Inclusion 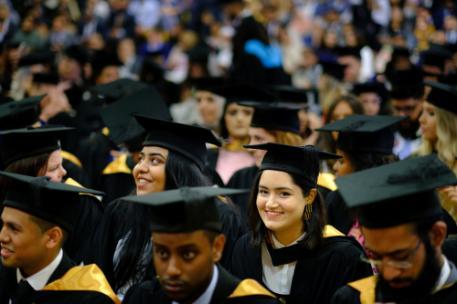 This prestigious national award recognises Bradford’s outstanding impact on social inclusion that ensures all students, irrespective of their background, are supported to achieve their potential and go on to achieve success.

All universities were assessed on the following measures;  the proportion of students educated in non-selective state schools, drawn from ethnic minorities, recruited from the most deprived areas, first generation students (whose parents did not attend university), mature, the proportion who are disabled, student performance and graduate prospects.

The University of Bradford has worked hard to widen participation in higher education and this has had a positive impact on social and economic growth and employment in the region.

Key achievements at the University of Bradford include:

Alastair McCall, Editor of The Sunday Times Good University Guide, said: “Bradford is a university for its city and the wider region, and it offers lessons to the rest of British higher education on how to effectively embrace social diversity on campus. By recruiting very heavily from its immediate environs, Bradford has one of the largest proportions of students from ethnic minorities of any British university, but its social diversity extends wider and makes the new Vice-Chancellor's stated desire to put the University of Bradford at the heart of the region's social and economic regeneration no hollow ambition.

"The University provides opportunities for a higher education that are denied to so many elsewhere: two-thirds of the intake comes from families where parents did not attend university; 40% are mature students taking degrees many years after leaving school; and more than half are recruited from the four poorest socioeconomic groups. These statistics show that social inclusiveness in the student body is ingrained in Bradford's DNA. And it is all achieved with high levels of professional employment and excellent degree outcomes for students from all backgrounds - a remarkable achievement and one well deserving the award of University of the Year for Social Inclusion."

Vice-Chancellor of the University of Bradford, Professor Shirley Congdon, said: “I am delighted that the University of Bradford’s long-standing contribution to promoting social inclusion has been recognised by the award of the THE University of the Year for Social Inclusion. This award, and ranking 3rd out of 130 UK universities, reflects our enduring focus on social inclusion and enabling students from socially and economically diverse backgrounds to maximise their talents while achieving positive academic and graduate employment outcomes.

“Working with our partners in schools, colleges, business, the local authority and others, such as the Bradford Institute for Health Research, our committed team has created a powerful alliance, working effectively and with passion to support inclusion and reduce inequality. We care deeply about social inclusion and will continue to focus on removing barriers to access and participation in higher education and enhancing the prospects of all our students.”