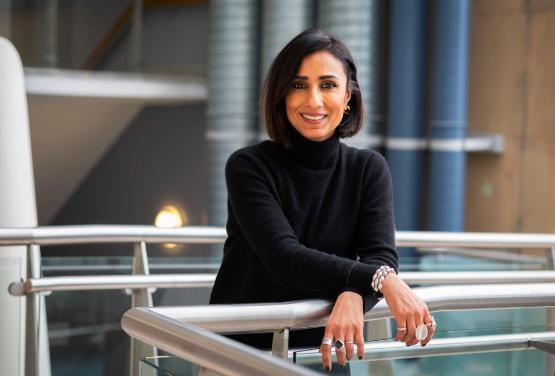 TV presenter and radio personality Anita Rani, who has been announced as the new Chancellor of the University of Bradford, has made her first trip onto campus.

Known for presenting programmes such as Countryfile and Radio 4’s Woman’s Hour, the Bradford-born broadcaster took time out from her busy schedule to meet with students and staff during the day-long visit. 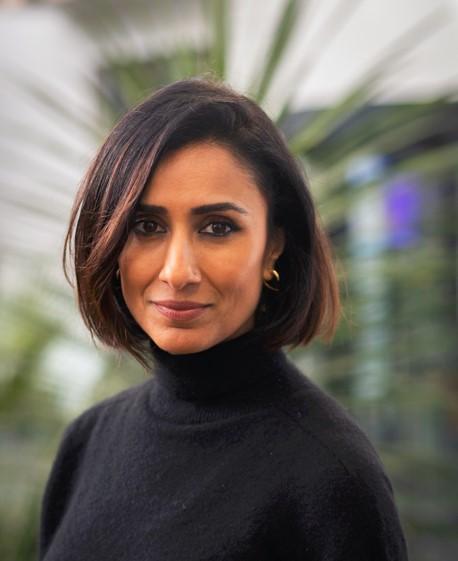 She said: “I have been given the honour of becoming the new Chancellor of the University of Bradford. I really value higher education Going to university changed my life and so to be able to inspire the next generation before they step out into the world, is a gift.

“Going to university, to study, to experience culture, to do things you have never done before, and to listen to somebody who has studied in depth something you’re interested in - this is a great opportunity to become a better human being.

“There is no other city like Bradford. It is unique. What Bradford has to offer is so rich in its culture, its heritage, its diversity - it is one of the coolest cities on earth. You only need to travel 20 minutes in any direction and you are in the most spectacular countryside that has inspired people for generations.

“I have known Bradford is cool my whole life and I cannot wait for other people to see what the University of Bradford has to offer.”

During her visit, Anita visited various locations on campus, met with and chatted to students and staff, and took part in a question-and-answer session filmed by students in the University’s TV studio.

She also met a number of academics, including Professor Andrew Wilson, Chair in Forensic and Archaeological Sciences, who gave a talk on the Virtual Bradford 3D project. She also met with Professor Stephen Rimmer, who delivered a talk on work to develop a ‘smart’ contact lens capable of detecting diseases, Dr Lucy Eddy, who discussed work on children’s mobility, and others. 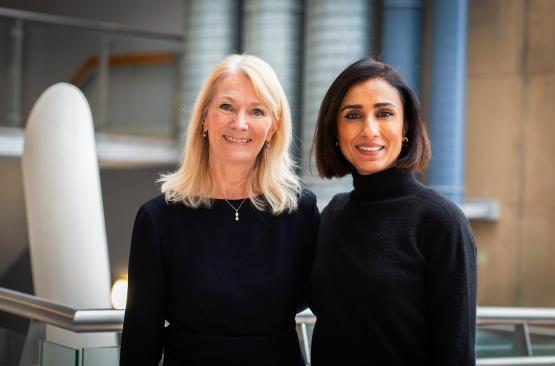 Vice-Chancellor Professor Shirley Congdon said: “Anita has lived and faced challenges that many of our students have, so she can appreciate how important it is to support people through tough times, through exciting times, to encourage them to set their sights high, and maintain confidence and self-belief.”

Nora Amoakohene, 31, a first-year optometry student, chatted to Anita in the Atrium. She said: “I know Anita was on Strictly Come Dancing and I’ve read an article about her in the Financial Times.

“It’s really exciting to have her as our new Chancellor. I hope she will be able to use some of her celebrity power for us.

“She was asking us about our backgrounds. Representation matters and to have someone who is like you, from a minority background, really helps to inspire.” 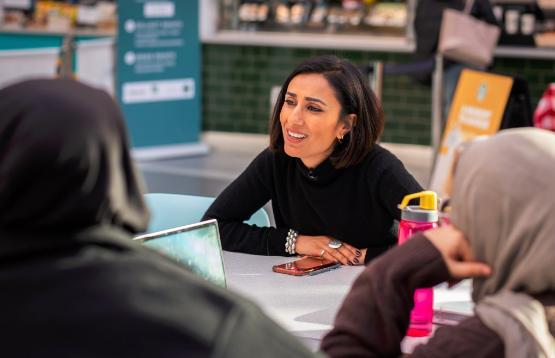 A fellow optometry student, Liam Curran, 27, added: “She was really nice and seemed really passionate about our studies.”

Amir Sharif, Dean of the Faculty of Management, Law and Social Sciences, said: “We wanted to present the faculty and its unique contribution to campus. We talked about how employability, sustainability and commitment to community is what we’re all about.”

Student Feedback coordinator, Faiz Ilyas, who has just completed a BEng Civil and Structural Engineering degree, said of Anita’s appointment: “It’s fantastic. She’s a Bradfordian, from just up the road. It’s inspiring to have a woman from a BAME background - which is very representative of the Bradford community - as the figurehead of the University.

“Her appointment will also be inspiring for a lot of young women. We have a lot of women in senior leadership positions in Bradford and to have one more can only be a good thing. I’m excited to see what Anita can do for Bradford.” 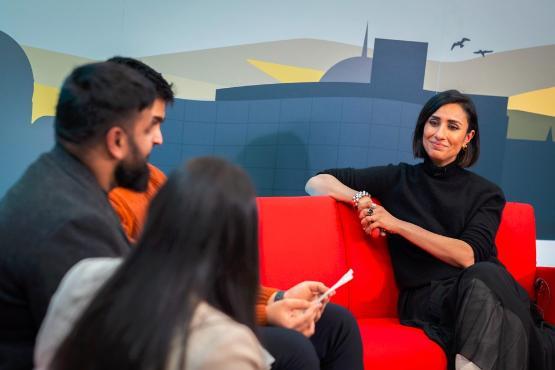 Above: Anita Rani being interviewed by students

She said: “She was so down to earth and lovely. It was really nice to learn how life was for her growing up in Bradford.

“The best bit was when she turned to the camera and told my mum to let me do a parachute jump. She addressed her as ‘Aunty’, which, in Asian culture, is what we call older women, out of respect, and it’s really nice to have someone who is so unapologetic about showing her culture like that.

“She has grown up here and seems to be on the same level with our generation. She’s going to be great for the University.”

Hamza Khan, Community and Activities Sabbatical Officer, said: “The great thing is she can really relate to students.

“She talked about what it was like for her to move away from home to go to university, how she couldn’t cook or wash her clothes. These might sound very small but when you are a student, these are all the things you have to learn.

“Students can look up to her and think, ‘If I can achieve half the things Anita Rani has achieved that would be a great success.’

“It’s also nice to meet a fellow foodie person. She wants to come on a food crawl with us.” 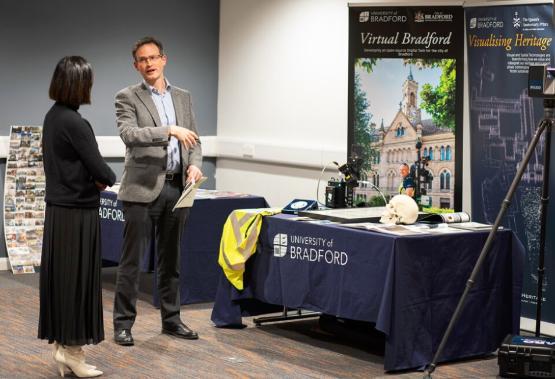 Media technician Mat Overton, who facilitated the filming in the studio, said: “As someone who worked in film and television, it’s great to have a Chancellor who understands that area, especially in the run up to Bradford City of Culture 2025.

“She’s got such a wealth of experience across TV and media and it’s exactly what our TV and film students need to encourage them to get into the industry.”

Cat Dobson, media technician, who was part of the filming crew in the studio, said: “She’s clearly a natural at what she does. It was so smooth, it was wonderful to see.”

Josiah  Eames, MA Filmmaking student, who was also part of the filming crew in the studio, said: “It was really nice Anita wanted to come along and see what we do and for us to be involved in her first visit.”

Anita will be officially installed as Chancellor during a special ceremony at the University on March 6.