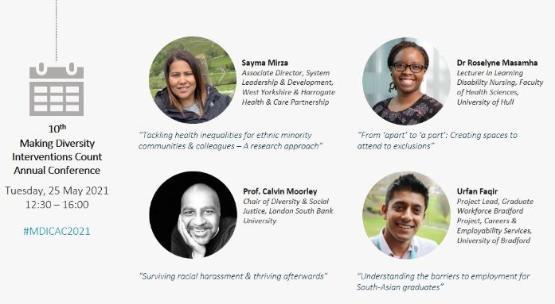 "The conference gives us an opportunity to reflect on... challenges that lie ahead." - Prof Udy Archibong

The conference, organised by the Centre for Inclusion and Diversity (CfID), focuses on exploring the varying interventions aimed at addressing systemic and persisting racial discrimination, structural and intersectional inequalities. The objective of this is to inform collective understanding and sharing of evidence-based practices in the effective use of diversity interventions in organisations and society.

This year’s event also marks the first anniversary of George Floyd’s murder which led to a global movement against racial discrimination and structural inequalities. The conference takes a critical look at how the race equality work across institutions have changed since his death.

Although being held online this year, the conference is still set to be a powerful and important opportunity to discuss key issues with a prestigious panel line-up.

Themes that will be discussed include:

This year’s keynote speaker is Dr David Ragland, co-founder of the Truth Telling Project and Director of the Grassroots Reparations Campaign. The event will be chaired by Kim Shutler, CEO of The Cellar Trust mental health charity in Bradford, and the host, Professor Uduak Archibong MBE, Pro Vice-Chancellor Equality, Diversity and Inclusion at the University of Bradford.

Professor Archibong explains why this conference is so important: “This year’s conference is symbolic as it is being held on the first anniversary of George Floyd’s murder. It has been a year since his murder sparked global protests against racial discrimination and inequalities and had public and private institutions putting out responses on their race equality work.

"The conference gives us an opportunity to reflect on what has changed since then, our speaker CEOs and Race Equality Experts discuss the status of the race equality work in their institution/country, and we look at the challenges that lie ahead and priorities for action as the world gradually opens from COVID-19-related restrictions. Hence, our roundtable discussion looks at whether or not we are in a post-racial world.”

View the full programme and book on now