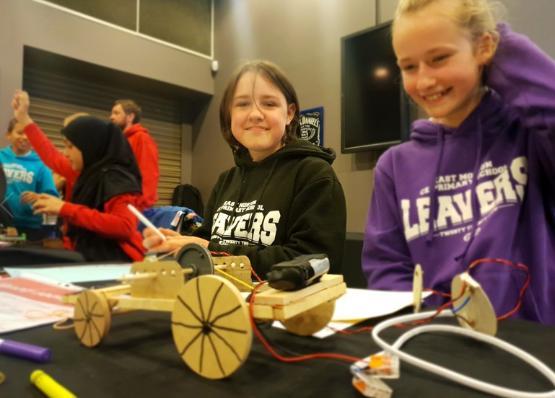 Primary school children from across Bradford attended the finale of the Primary Engineer competition to build the best battery-powered ‘shoe-box car’.

The event was organised by training provider Primary Engineer, paid for by Bradford Council and hosted by the University of Bradford, with Northern Rail and Schneider Electric engineers helping with the judging.

The project has involved children from nine primary schools and is intended to inspire children and encourage them to consider engineering as an education pathway and a career.

Children have been competing to make the best battery powered model car, using bits of wood, cardboard, rubber bands, motors and pulleys - they then had to test the cars on various tracks and slopes.

Pictured below: Timothy and Aisha, both 11, from East Morton CE Primary School 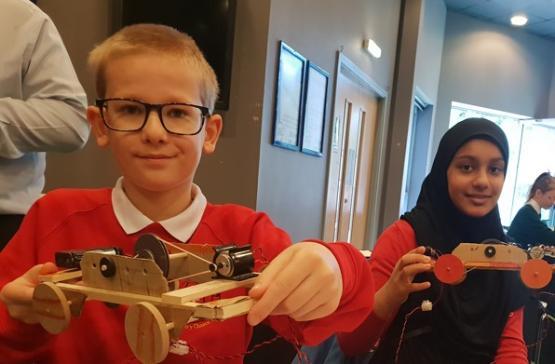 Nathalie Cachet-Gaujard, head of partnerships for the North of England at Primary Engineer, who organised the event, said: “Our Primary Engineers Vehicles Project is all about introducing children to engineering, so they can relate to it and continue to pursue their interest when they get to high school, it’s about challenging stereotypes and bringing in real engineers to work with them. By exposing them to this at primary school, we hope more children from the widest range of backgrounds will consider engineering at high school.”

Pupil Ella, 11, from East Morton CE Primary School, said: “I’ve always liked making things, and I think I would like to be a mechanic or an engineer.”

Fellow pupil Izzy, 11, said: “It’s a great opportunity to see what different careers there are in engineering.”

Aisha, 11, said: “We have made cars from pieces of wood, cardboard and rubber bands. It’s fun and not something I have done before.”

Timothy, 11, also from East Morton CE Primary, who wants to become a zookeeper when he grows up, said: “I think it’s a great opportunity to show that I’m good at making things.”

Pictured below: some of the model cars made by pupils 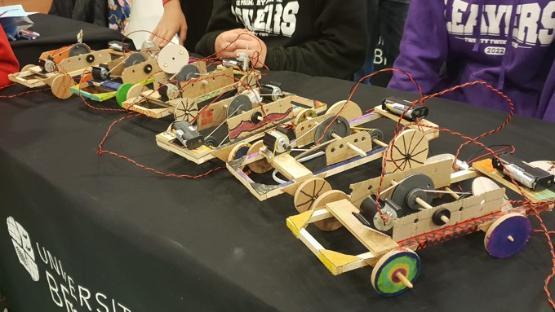 Ayaan, from Fagley Primary School, who built a cardboard vehicle with classmate Jake, said he wanted to become an engineer when he is older. He said: “It’s a competition to see who can make their car go farthest and fastest. Ours is the best car. People come here because they are good at being engineers.”

Dale Hunter, from Bradford Council’s Careers and Technical Education department, which has funded the project, said: “This event is all about making primary school children aware of what engineering is and to show there are career pathways into engineering. It’s about planting the seed early and dispelling some of the misconceptions.”

Sarah Ladd, application design engineer from Schneider Electric Leeds, said: “I remember projects like this from my own primary school days. I think that while there are now more women in engineering, it is projects like this that are helping to make that happen.”

Pictured below: indoor race track that formed part of finale 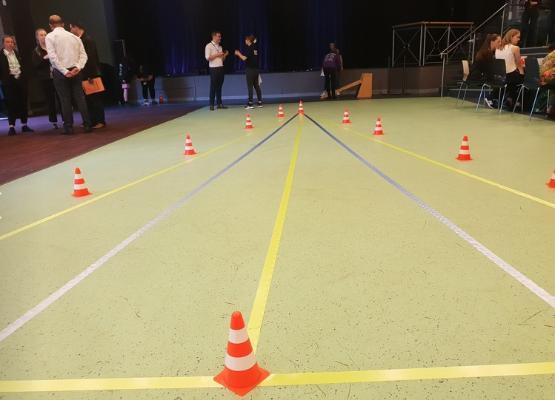 Charlotte Harris, regional improvement support manager from Northern Rail, said: “Our aim is to introduce children to engineering and show them all the jobs and opportunities available to them.”

Northern Rail apprentice Libby Hirst, said: “I think it’s important to show young children how they can get involved in engineering as a subject.”

Dr Elaine Brown, from the University of Bradford, said: “It was wonderful to see ingenuity at work in this exciting competition, and for entrants to be rewarded for their designs and creations, in addition to their skills at communicating with the judges – essential qualities for an engineer. The children’s enthusiasm was fantastic. It is so important that we introduce young children to engineering activities, help them to understand the huge variety of opportunities there are in engineering and realise how fulfilling it is to work in a profession that helps build a sustainable world for us all.”