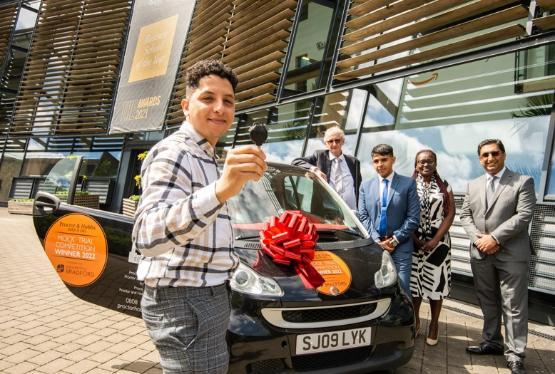 The School of Law student took on the role of defence in a series of live-streamed mock court trials - his case involved defending a YouTuber accused of assault occasioning bodily harm as it relates to Section 47 of the Offences Against the Persons Act.

Hussain, who plans to be a barrister, won the competition and scooped first prize of a smart car, courtesy of sponsors Bradford solicitors Proctor & Hobbs, who also sponsored last year’s competition.

Speaking about his win, Hussain said: “When I found out I’d won, I was lost for words. It’s amazing and I’m so pleased to have won a car. I just did my best in the mock trials, but I thought everyone who took part did an amazing job.

“The event itself is great because it allows you to build your skills and gain confidence while you are still learning. I hope one day to be a barrister, and to make a positive contribution.”

Lecturer and solicitor Tuiya Tembo, pictured below third from right, said the mock trials, now into their second year, provided a superb platform for students to test their knowledge and skills. 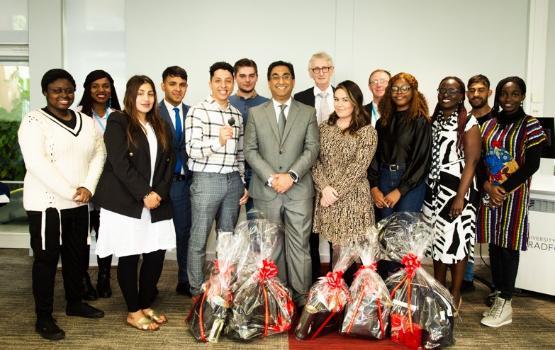 “We are delighted the mock trials have been staged for a second time and that they will continue to be an annual fixture. Events such as these are so important, because they allow students to test their knowledge and skills in the very realistic setting of our very own mock court, Lady Hale Court. Each of the students put up a fierce fight and I would like to say well done to each of them.”

Law firm Proctor & Hobbs donated a smart car as first prize, as they did last year.

Aneesa Ehsan, who graduated in law from the University in 2014 and is a founding partner of Proctor & Hobbs, said: “We are pleased to have sponsored this competition for the second year running as part of our commitment to working with the community and supporting the future generation.”

Alan Bridger, a Partner at Proctor & Hobbs who officiated the award ceremony, congratulated all the candidates and encouraged them to take up any and all opportunities available to them to prepare them as lawyers of tomorrow.

The Head of the School of Law, Prof Engobo Emeseh added: “Proctor & Hobbs have been generous with their offer and we are really grateful to them. This event demonstrates our commitment as a school together with our partners to ensure our students get the very best of experiences while studying because at the end of the day the practice of law is about the legal skills and not just the knowledge. I want to congratulate Hussain on his win as well as all the other candidates who took part.”

Trials took place in the University’s Lady Hale Court, a state of the art mock court named after, and opened by the then President of the UK Supreme Court, Baroness Brenda Hale in January 2020.

Prof. Amir Sharif, Dean of the Faculty of Management, Law and Social Sciences, said: "I am delighted this competition and relationship with Proctor & Hobbs is going from strength to strength. It is very encouraging to see our law students actively stepping forward and taking part in this competition. I am keen ensure our School of Law continues to thrive and to maintain active and strong links with businesses and the legal profession, especially in Bradford. Well done to all students who took part and were recognised for their efforts. It is a testament to their skill, tenacity and abilities. The line-up of future legal talent via our School of Law shows exactly how much our four university values of excellence, innovation, inclusion and trust are at the heart of everything we do."

Proctor & Hobbs specialises in criminal defence, civil and commercial litigation, personal injury, immigration and intellectual property and has offices in Pakistan and Dublin and one opening soon in London, with partners in Australia and South Africa. It already offers placements for University of Bradford students, including one nine-month long placement and one six-week placement.