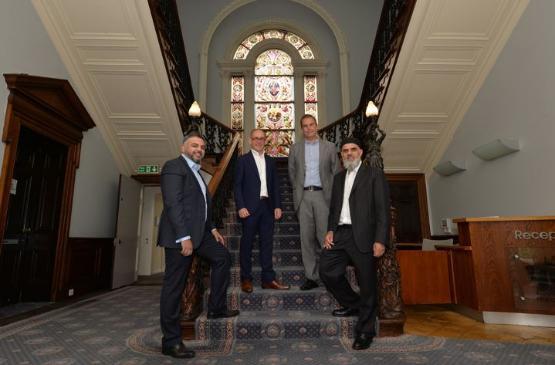 The University of Bradford has sold its business school’s former headquarters to Greensville Trust.

The 14-acre site includes the three Grade-II listed buildings, including the Heaton Mount and Emm Lane buildings, which will now begin a new chapter in their history under the Trust.

The site, acquired by the University in 1967, has been surplus to requirements since the School of Management moved into a modern, more efficient building on the University’s city centre campus in 2019. Improved student experience and a commitment to sustainability and accessibility were behind the University’s decision to sell. The move will also reduce general running and maintenance costs of the Emm Lane site.

Stuart McKinnon-Evans, Chief Finance Officer at the University, said: “We are very pleased the Trust is taking over this site. The work they do complements the University’s own efforts to benefit the community. We think they will be a great addition to the city and the district, and we look forward to working with them to improve opportunities for people in Bradford.”

Emm Lane and the adjoining Sir Titus Salt building include a lecture theatre, restaurant, and atrium, while the second building, Heaton Mount, has a 42-bedroom hotel extension, professional kitchen, dining, and meeting facilities, as well as a further lecture theatre and a civil wedding license.

The Greensville Trust, an Islamic community group currently headquartered in Liverpool, intends to convert the site for mixed purposes, including community use, adult education, primary school and nursery care, as well as leisure and function spaces.

Trust chairman Mohammed Amer Siddiq said they hoped to create around 100 jobs in the coming years.

“Greensville Trust is truly humbled to be granted the responsibility for preserving and further enhancing this prestigious and historic site, as we firmly believe that it will present us with a plethora of opportunities to further our charitable and educational endeavours.

“It is our intention to become an integral part of the wider Bradford community and to maintain positive links with the University. We intend to be a good neighbour, partner and anchor organisation within the city of Bradford and by working alongside communities, partners organisations from other faiths and non-faith, public, private and community/voluntary organisations contribute towards nurturing a healthy, happy, culturally and economically vibrant Bradford.

“When fully operational, the Trust is hoping to create over 100 employment and apprentice opportunities which the residents and wider Bradford community will benefit greatly from.”

What is the Greensville Trust?

Its work in Bradford will also address challenges around health inequalities, deprivation and crime. It will work with local NHS and health providers to offer an affordable gym to help reduce health inequalities. It plans to work with the local council and police to tackle anti-social behaviour by offering apprentice and new business start up opportunities, encouraging more people into education, and offering bespoke physical activities.

In addition, there will be open days, organised visits to mosques, and trips to arts and cultural events beyond the region.

History of the site

Heaton Mount was built in 1886. It was sold to textile manufacturer John Ambler for £9,750 in the 1890s. Over the years it has been a family home and a school and in 1955 there was a legal battle to stop Shell Mex and BP Ltd developing the grounds into a filling station. It was purchased by the University in 1967 to form the headquarters of its expanding business school.

Heaton Mount was one of the first houses to be built in the area. Its frontage is 90ft, not counting the large conservatory. Striking features in the façade include extremely large bay windows on either side of the porch which are carried up to the roof and have interior dimensions of 15ft by 7ft, almost forming small rooms in themselves.

Entrance is gained through a square, open portico supported by two fluted Corinthian columns and two plain pilasters with Corinthian capitals flanking the doorway. The entrance doors of polished oak, glazed with thick sheets of plate glass, allow for an uninterrupted view of the magnificent central hall - one of the largest in the district, measuring 46ft by 22ft - with its broad double staircase and large painted glass window. Two pillars at the foot of the stairs are of oak carved in high relief in a most detailed fashion, with foxgloves and other flowers and topped by large gun-metal figures carrying lamps.