'No obstacle too great', message to our 2021 graduates 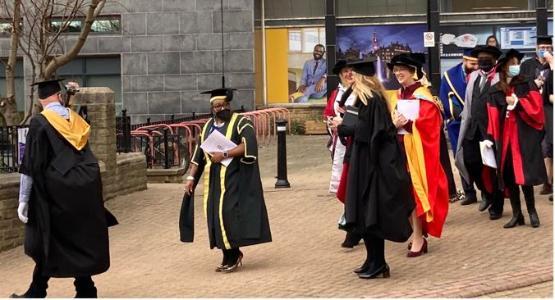 This year’s honorary graduates at the University of Bradford told graduating students their time at Bradford would change their lives.

Professor Susan Proctor said: “Receiving an honorary degree from the University means the world to me. My first degree was here, I did my PhD here and I graduated in 1997. So it’s coming up to the 25th anniversary. This place changed my life and it will change the life of the students here today.” 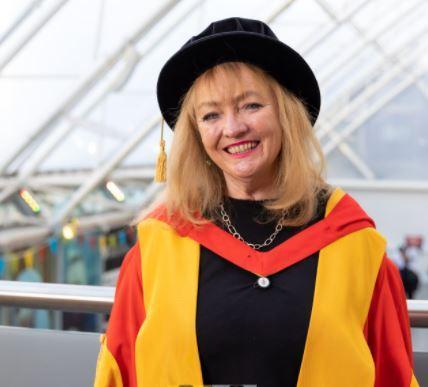 Mary Dowson, pictured above, said: “It really is an honour to come back to the University and receive this award. Forty-something years ago, I came to Bradford as a student and mostly have never left. I’ve made Bradford my home and to be honoured by the University for the work I’ve done in Bradford means so much to me.”

Tasif Khan said he was honoured and humbled to receive his award, adding: “Bradford is home and I’m proud to be an ambassador of the city. I didn’t know I was going to become a world champion. I had that self belief to achieve my dream, I gave it my all.

“The journey is never going to be as smooth as you think, you will come across hurdles, it's about how you overcome them - that’s what determines your success. I wish everyone here a great and successful future. Dream big. Nothing is impossible in life. I take the word ‘impossible’ and try to turn it into ‘I’m Possible’. Dream. Believe. Achieve.”

Dame Angela Strank said: “I never thought I would get an honorary degree, so to be recognised in this way by a world class university is extraordinary. I would urge students to be confident, be positive and always look at the opportunities to grow, be passionate about what you do, and work hard and strive for excellence. Finally, I would say there will be many rocks in the road but no matter what they are, or how big they seem, there is always a way around them.”

About our honorary graduates 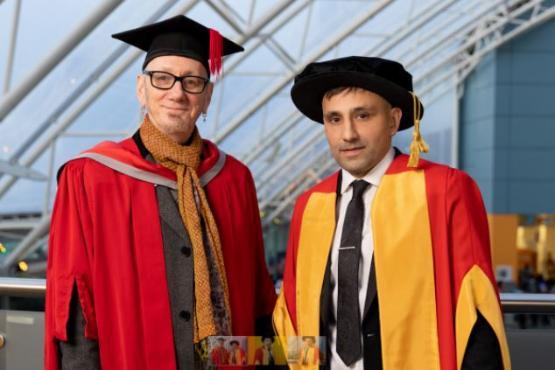 Tasif Khan is a British Born Pakistani Professional Boxer, and the current 3 x super flyweight world champion. Tasif was born and raised in Bradford and a true ambassador for the city. He set up and formed “Tasif Khan Community BOXING academy” TKCBA, with the aim to engage young people through sport and physical activity, working on discipline, self-confidence, life skills and ultimately showing them a way to follow their dreams and stay on the right path and away from drugs, gangs and crime. Tasif is an ambassador for KORT (Kashmir Orphans Relief Trust), South Asia’s largest home for Orphans children, based in Azad Kashmir. He graduated from Liverpool John Moore’s University, with a BA Hons degree in Sports Development and Physical Education.

Dame Angela Strank is a Non-Executive Board Director of Rolls Royce Holdings plc, SSE plc, Mondi plc and Severn Trent Water plc. Angela has had a long and distinguished 38 year career in the energy industry, working in many countries around the world. Having joined BP in 1982 as a geologist in Exploration she has held a wide range of technical and commercial leadership roles across upstream and downstream including Chief Financial Officer Castrol (Americas), BP/Statoil Alliance Manager Nigeria, Business Development Manager Angola, Technology Vice President, and Head of the bp Group Chief Executive’s Office. In 2018 she became a member of bp’s Executive Management Team, holding the posts of bp’s Chief Scientist and Head of Downstream Technology. In 2010 Angela won the UK First Women’s Award in Science and Technology, recognising pioneering women in business and technology. In 2017 Angela was awarded a DBE in Her Majesty the Queen’s Birthday Honours List for services to the oil industry and for encouraging women into STEM careers. In  2018 she was the first woman to receive the UK Energy Institute’s prestigious Cadman Award for outstanding services to the energy industry. Angela is a Fellow of the Royal Society (FRS), a Fellow of the Royal Academy of Engineers (FREng), a Fellow of the Institute of Chemical Engineers (FIChemE) and an Honorary Fellow of the UK Energy Institute (FEI). In 2018 she became an Honorary Professor at the University of Manchester where between 2012-2018 was also a Board Governor.

Professor Sue Proctor has over 35 years’ experience in health care, qualifying as a nurse in 1987, and a midwife in 1990. Later, she completed a MSc in Nursing and a PhD in Health Services Research, both at the University of Bradford. She is a Visiting Professor at Leeds Beckett University. Sue has held clinical, research and leadership roles in NHS organisations in Manchester, London, Bradford and Leeds. She has also worked with a number of charitable organisations in connection with children’s services, faith organisations and health care. In 2013, Sue set up a consultancy business and focused mainly on leading investigations into safeguarding matters. She has been honoured to work extensively with adult survivors of abuse, to learn from them and to hold organisations to account to make improvements to the safety of those they serve. Currently, Sue Chairs the Board at Leeds & York Partnership NHS Foundation Trust, the North Yorkshire Safeguarding Adults Board, and a new charity, Day One Trauma Support.

Mary Dowson is the Director and one of the founders of Bradford Community Broadcasting (BCB), a community organisation committed to bringing about social change. Before BCB, Mary’s background was in youth and community work, community education and teaching at Bradford College. Growing up without a TV, she developed a real passion for radio so the coming together of her two passions — community and radio — was a perfect fusion! BCB Radio has been broadcasting for over 25 years and provides the space, support and opportunity for everyone to have a voice in the media. It uses radio as a tool to create community both over the airwaves and within their building, bringing together people from diverse communities, neighbourhoods, ages and life experiences. Mary is driven by a belief in people, their right to actively participate in all aspects of life and finding ways of working together in Bradford to make this happen. Mary grew up in a big family in South London, moving to Bradford in the late 1970s to study Peace Studies at the University of Bradford. Since then, other than a couple of years living in Italy, she has made Bradford her home.