‘Drone swarms’, circular economies and the ‘greening’ of the business world 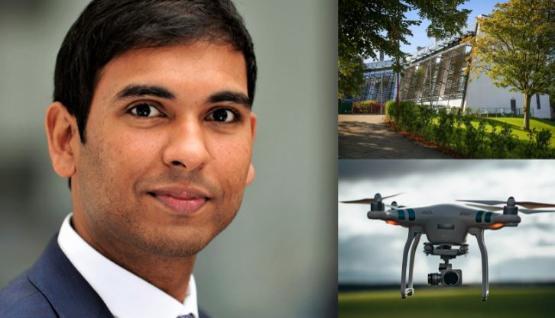 The University of Bradford’s Professor Sankar Sivarajah, Head of the School of Management, is featured in the latest edition of Business Impact magazine, where he discusses, amongst other things, why the University’s Distance Learning MBA is ranked best in the world, why it runs the world’s first and only Circular Economy MBA and why environmental issues will soon be at the core of every business… oh, and his research into ‘drone swarms’.

Prof Sivarajah says humanity is on the verge of a Copernican Shift when it comes to computing, while agriculture could be transformed by swarms of AI drones (a project he’s personally involved in) but he’s keen that such breakthroughs, inevitable though they are, have a strong ethical backbone.

That same ethos also underpins the school’s ambitious five-year plan not just to maintain its position as a global leader but to help create responsible business leaders who will champion and tackle global issues such as environmentalism and have the bravery to question received wisdom.

The University has already made significant strides into that jungle. This week it signed an historic memorandum of understanding with the World Wide Fund for Nature. It’s School of Management offers the first (and currently only) MBA in circular economies. Both are trophies for a mantle already crammed with accolades, not least being its Triple Crown Accreditation from the Association of MBAs, EQUIS (European Foundation for Management Development accreditation) and AACSB (Association to Advance Collegiate Schools of Business). Out of about 14,000 business schools globally, it is one of only 100 to have that status.

With over 50 years experience - 45 of those teaching MBAs - in 2020, it was also the first business school to be double accredited by AMBA and BGA and its MBA was ranked No.1 in the world for value for money by the Financial Times (FT).

In addition to delivering its platform of 25-plus programmes to over 2,000 students have built an enviable network of links to local businesses, through ventures such as the Barclays supported Knowledge Transfer Network, built up over more than a decade and now spanning thousands of SMEs, running regular workshops to show local businesses how to make the most of new technology.

All of this, however, is not enough, for now there is a new moral imperative - one that is linked inextricably to the future of our planet.If the fact that the WWF’s Central Eastern Europe regional CEO, Andreas Beckmann completed their Circular Economy MBA isn’t testament enough to the fact they’re taking issues like climate change and biodiversity loss seriously, then that commitment is underlined in their five-year plan.

Prof Sivarajah said: “Part of what we are doing now is to ensure that everything we do is underpinned by an ethos which is not just sympathetic to the environmental problems we’re facing but active in addressing those problems. The world needs meaningful change and our programmes are designed to create the business leaders of the future - people who will be willing to question established practices, to champion responsible business practices in tackling societal issues such as climate crisis.”

This sense of pragmatism comes with a deep understanding of the opportunities which will be available to businesses which position themselves accordingly. One area in which the University of Bradford is already helping change the weft and warp of the UK economy is through its Career Booster programme, a voluntary two-week ‘bolt on’ which enables students to become conversant in industry standard software, ergo, making them more employable. Since its inception in 2017, it has delivered more than 14,000 hours of workshops and 130 students have secured the HEAR (Higher Education Achievement Report) award.

Professor Vishanth Weerakkody, Dean of Faculty of Management, Law and Social Sciences, said: “Our Career Booster programme is all about empowering students and giving them unprecedented access to inspiring industry leaders. It was specifically designed to give them the kind of skills which industry needs. We know this because we are in regular contact with businesses across the world and they tell us these are the kinds of skills they need from graduates. The course successfully bridges a gap between theory and practice.”

The school’s five-year business plan is closely aligned to the University’s own strategic five-year plan, which emphasises equality, diversity and inclusion and which will see the ‘decolonisation’ of its curriculum and campus.

And if you are still wondering about those drone swarms, Prof Sivarajah is involved in research which could see drones used en masse on farms, particularly in places like Australia and Africa, where large areas need to be surveyed. The paper was published in Production Planning and Control Journal entitled: Artificial intelligence and food security: swarm intelligence of AgriTech drones for smart AgriFood operations.

“It has applications in places where there is a need for farmers to explore vast areas of inaccessible land. We have conceptualised the idea and the next step would be to simulate and test the real thing. Agri-tech and food security is a huge area, both in the UK and abroad. As AI grows, this will become much more important.”

Speaking of which, the University of Bradford secured £700,000 last year from the Office for Students to begin a BSc (Hons) in Applied AI and an MSc in Applied AI & Data Analytics. Students in the School have the opportunity to seek professional certifications from collaborators such as Amazon Web Services Academy and SAS UK to support their employment ambitions.

All of which means Bradford graduates will be responsible, tech-savvy, environmentally alert agents in the post-pandemic business world.