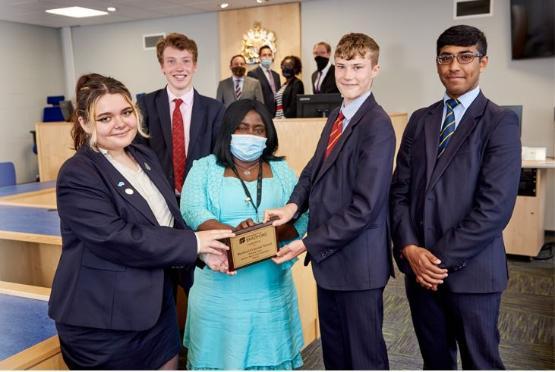 Pupils from Bradford Grammar School have won a mock trial competition organised by the University of Bradford’s School of Law for the second year in a row.

Year 12 pupils battled it out with teams from 13 other high schools to clinch the 2020-21 Mock Trial winner’s title, in a closely fought final with the team from Cardinal Newman, Preston. Each of the teams was allocated the role of either the prosecution or the defence and were given a fictitious scenario involving a criminal law case, such as theft or assault.

All participants were provided with training on both advocacy skills and basic criminal law relating to the scenarios by lecturers from the University as part of the preparation for the mock trial.

They were presented with the award by Circuit Judge His Honour (HH) Judge Jonathan Rose during a special ceremony at Bradford Crown Court on Monday July 12, followed immediately by a trip to the University’s own mock courtroom, the Lady Hale Court.

The competition was run by a team of law school staff led by law lecturer Edward Mowlam, a graduate of the University and founding President of its Student Law Society, who said: “Congratulations to Bradford Grammar School on retaining their ‘19/20 title. We would like to thank HH Judge Rose for judging the final and express our gratitude to University of Bradford students and staff who performed as witnesses, defendants and judges during the various heats.”

Commenting on their victory, sixth former Alex said: “We were really pleased to win the competition. It was a bit nerve-racking to begin with but it’s something we all got used to; if you’re interested in law, then this is an authentic experience.”

Fellow pupil Fraz said: “It was different to anything I’ve done before. Even though it was virtual, it was just like being in a real courtroom. If you want to get a taste of what a court is like or if you want to study the law, this kind of experience really helps.” 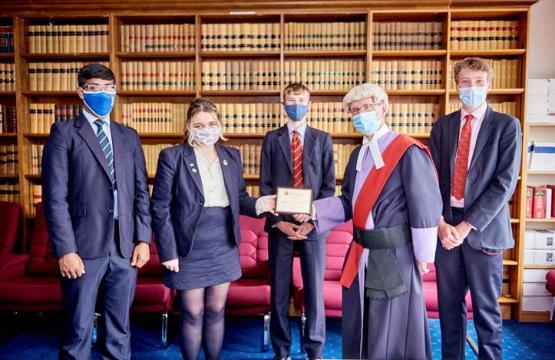 Bradford Grammar School classics teacher Dr Reeson said: “This is a huge honour for the team and the school, and regardless of whether these pupils pursue careers in law, this has been a valuable experience they would otherwise not have had, especially for things like public speaking and the level of research required.”

HH Judge Rose met the winning team in one of the court rooms at Bradford Crown Court, before retiring to the library to present the award.

He added: “You are winners, and you are already developing the skills needed to advocate in court and to be able to analyse a problem, to know what questions should be asked and to ask 'what is the legal perspective?'.

“In life, you will win and you will lose, but you have already achieved a great deal, and this plaque represents a triumph, but it also represents your first steps towards your careers, even if they are not in the legal profession.”

He added: “At University, you learn how to identify a problem, and how to go about solving it… and you come out a very different person than you went in.” 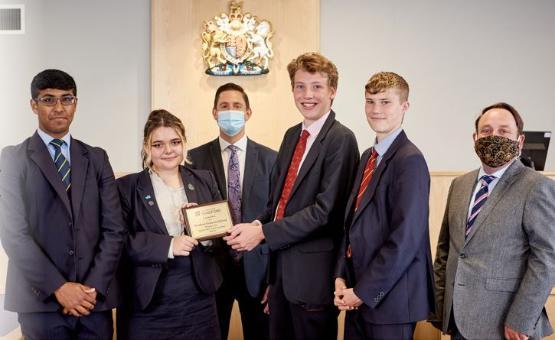 Prof Engobo Emeseh, Head of the University’s School of Law, said: “This annual competition, now in its second year, is part of our wider engagement with schools locally. It offers participants the chance to take part in an experience which requires them to undertake meticulous research, to wrestle with the ethics of a court case, and thereafter to present arguments in a realistic setting.

“The University of Bradford’s School of Law has a great deal to offer its students: from the experience of practicing their advocacy skills in the state of the art Lady Hale Court, to taking part in our flagship Law Clinic - offering legal advice on  real cases to members of the public; and from the opportunities of work placements with local firms to taking part in activities organised by our Law Society.”

There was an overwhelming interest in the mock trial competition from both local schools and schools a little further afield. This year the School of Law was only able to accommodate the first 14 schools that applied. Next academic year, the School of Law expects to start the competition in the autumn semester to afford more schools the opportunity of taking part.