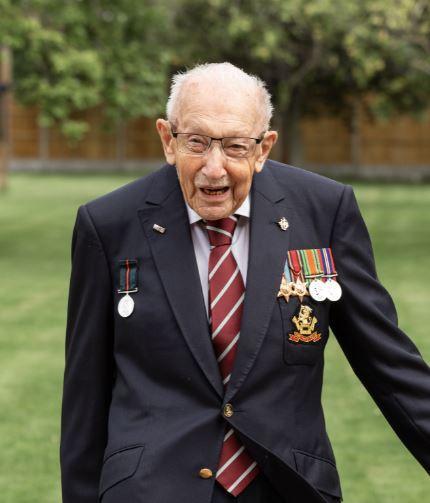 University of Bradford praises fund-raising centenarian who inspired the nation

Centenarian Captain Sir Tom Moore, who inspired millions of people around the world by completing 100 laps of his garden using a walking frame to raise money for charity, has been awarded an honorary doctorate by the University of Bradford.

He is the first in a series of honorary graduate announcements to be made by the University in 2020.

The honorary degree was awarded for his service to the community during the Covid-19 pandemic, and in recognition of being an outstanding role model to people in the Bradford District and around the UK.

Commenting on the award, Capt Sir Tom said: “I’m delighted to have been awarded an honorary degree of Doctor of the University of Bradford. Thank you for your kind words referring to me as a great role model for Keighley and for the City of Bradford.”

He went on to offer a message of hope to students: “To all your students who are graduating and right at the beginning of their careers - remember to have hope in your hearts. I understand times have been challenging recently but they have done so well and I am very excited for what lies ahead for them. As I always say ‘Tomorrow will be a good day’ and for them that will certainly be the case, I’m sure.”

Vice Chancellor of the University of Bradford Professor Shirley Congdon said: “We are honoured to be able to confer this award on Capt Sir Tom, whose actions have been truly inspirational. His selfless work championing education and equality mirror our own core values and we’re proud to be associated with him and the legacy he and his family have now created.”

Born and educated in Keighley, Capt Sir Tom attended Keighley Grammar School before training as a civil engineer and enlisting in the Army during the Second World War. He led a distinguished military career, where he served in India and Myanmar (Burma), and then went on to teach armoured warfare.

Capt Sir Tom Moore captured the hearts and inspired the nation when he decided to raise money for NHS Charities Together during the Covid-19 pandemic. His initial target was to raise £1,000 by walking 100 laps of his garden before his 100th birthday, however, after gaining the attention of the media and the public, the total has now surpassed £38.9m. This money is now being used in NHS trusts and hospitals providing support for staff and patients during the pandemic.

In September Capt Sir Tom and his family officially launched The Captain Tom Foundation. The money will be used to combat loneliness, supporting people facing bereavement and to champion education and equality. Charities which will benefit include Mind, The Royal British Legion, Helen and Douglas House and Willen Hospice.

Capt Sir Tom added: “I never dreamt that this could happen. The overwhelming generosity of people during a period of darkness has shown the resilience and caring people are capable of during a time when there was anguish and instability. After all that we have achieved over the last few months, and with the world still in recovery, it made sense to us to create a legacy.

Find out more about the charity here.

As part of our Winter 2020 Virtual Celebrations, we will continue this tradition and award Honorary Degrees and Fellowships to more outstanding individuals.