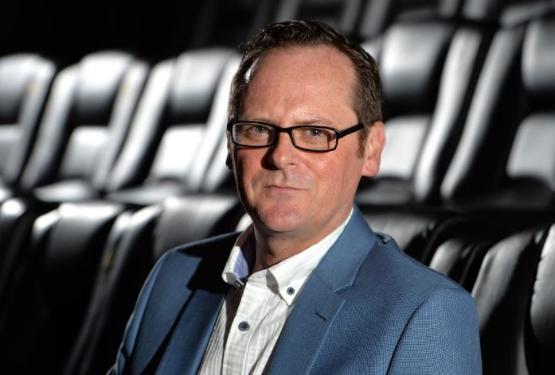 There isn’t much David Wilson doesn’t know about film. He has worked as Director of Bradford UNESCO City of Film since 2011 and has more recently been working with colleagues in China on the country’s annual film bible, a publication known colloquially as The Blue Book of Film which has just been translated in English for the first time and published by Routledge.

Now he’s celebrating another first, after being appointed Researcher of the Global Film Industry Research Centre, Beijing Film Academy in Qingdao. That news comes on the back of a 10-year deal between the University of Bradford and Qingdao University, which will see academics teach Chinese students animation.

The Bradford City of Film headquarters are also based at the Horton Building at the University of Bradford and have been for the last four years - it is an association which is mutually beneficial, having connections to university film studies students from around the world.

David, who teaches on the University’s Masters filmmaking programme, says the deal - and his new appointment, which he was “honoured” to receive - bode well for both the University and the city.

“It’s significant that a university in the north of England is teaching animation to the Chinese. When you think of global animation, it’s names like Disney and possibly Studio Ghibli in Japan that spring to mind but China is fast becoming a huge producer of content; it’s only a matter of time before they break into the mainstream. That’s why it’s important Bradford is involved.

“Having a relationship with them is a win-win. Bradford was the world’s first UNESCO City of Film and for good reason. We have a wonderful film heritage and a reservoir of expertise, not just in making films but in production, editing, promotion and so on. If you look beyond the teaching, there are business opportunities here. Part of my role is to encourage companies and business start-ups in things like post-production, legal, sales and so on: we can do all that in Bradford.”

David has been working with the Beijing Film Academy in Qingdao since 2013, editing their annual Blue Book of Film, which has for the first time been translated into English under its proper title: Development of the Global Film Industry: Industrial Competition and Cooperation in the Context of Globalization. He is a guest professor at the Beijing Film Academy and was instrumental in supporting Qingdao's 2017 bid to become China’s first UNESCO city of film. It was his work there which led to a partnership - and a 10-year contract - with the University of Bradford.

Born-and-bred in Bradford, he grew up the youngest of three and went to Yorkshire Martyrs Catholic School before gaining a 1st class hons degree in combined studies from the University of Bradford. Both his parents worked in local mills but his mother, Shirley, a one-time Sunbeam at The Alhambra, was also a dance teacher and imparted onto him a flair for music. In his formative years, he worked as a self-employed musician, playing drums, guitar and saxophone, a talent which at one point saw him tour as the warm-up act for Sir Elton John for 14 nights during his 2000 tour of the UK.

The father-to-four from Clayton, now 52, has always been passionate about his home city and last year, he was made Honorary Doctor of Technology at the University of Bradford.

Ever the optimist, he adds: “This has been a tough year for cinema but there are always new opportunities. Our association with China is one such. The graduates we train might go on to work for Disney, Pixar and other big names. This is about forging relationships, exchanging ideas and driving sustainable development of our city, skills and working opportunities for people who live, work and study here.

“If you think about Chinese people travelling to the UK, they might visit places like London and York but we’re helping put Bradford more firmly on that destination map. Jayne Eyre was one of the first books to be translated into Chinese, it’s massive over there, so there’s already a historic link to our region.

“This is a huge opportunity to spot future trends and strengthen our global footprint. It’s also a really exciting time to be involved in the sector and to make sure Bradford remains part of the conversation.”