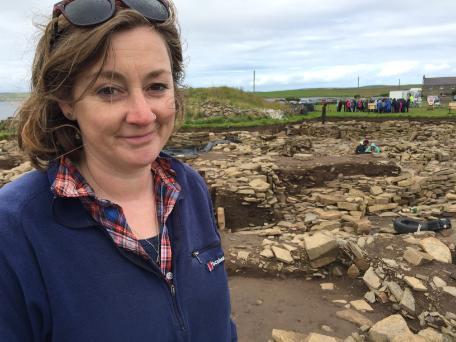 Archaeologists digging at the Ness of Brodgar Neolithic site in Orkney have found a human arm bone believed to be around 5000 years old.

The bone - an ulna - was discovered by Dr Jo McKenzie from the University of Bradford, geoarchaeological specialist and member of the Ness of Brodgar supervisory team.

Excavations at the Ness of Brodgar, within the Heart of Neolithic Orkney World Heritage site, have revealed a massive complex of monumental buildings along with associated artwork, pottery, bones and stone tools. Archaeologists from the University of Bradford including Drs Jo McKenzie and Cathy Batt are part of a specialist archaeological science team which includes academics from Orkney to the USA.

The bone was found within Structure Ten, described as 'one of the largest, if not the largest, stone built Neolithic non-funerary structures in Britain.' The structure was remodelled throughout its lifetime, and 2019 has seen the excavation of some of the initial parts of that remodelling, under the supervision of Dr McKenzie.

Dr McKenzie said: "The area that we're working in now, we're basically taking off the last remnants of a rebuilding phase which saw the structure of the building's interior completely altered.

"Charlie and I were just removing one of the last slabs, and I could see a tiny part of what looked suspiciously human." Charlie Scovell is an archaeologist from London who is working as part of the Structure Ten team as a volunteer at the Ness over the summer.

Dr McKenzie says the find opens up a whole range of new questions to ponder.

"It makes you stand back and think about the structure and what we're excavating, and what the actual placement of the material meant to them. The position of the bone - laid beneath slabs relating to the very start of the remodelling process - is really interesting.

"And looking wider, at the Ness of Brodgar we've found very few human remains. So they have great significance in that sense as well."

It is hoped that analysing the bone will reveal more details about the bone, including confirming that is it from a female. The analysis may also reveal her height and age, health at the time she died, and even her diet.