New Year Honours recipients on why education is so important 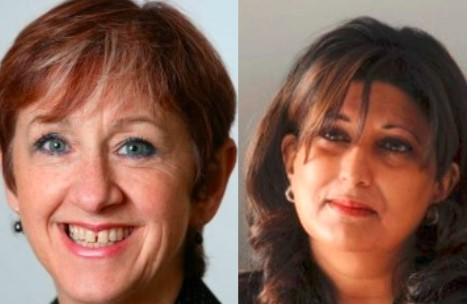 New Year Honours recipients Dame Sally Dicketts and MBA student Sharon Jandu OBE have each made indelible contributions to society for their work in helping young people seize new opportunities and achieve better outcomes in life. We spoke to both of them about their respective honours, what motives them to do what they do, and why they believe education is the key to success.

Dame Sally on why education is key to increasing opportunity

Dame Sally Dicketts has dedicated her life to promoting the benefits of education, and having led two innovative colleges - Milton Keynes (1996-2003) and Activate Learning (2003-2022), she has seen firsthand how it can transform lives.

Speaking after being named in the New Year Honours List, in which she received a damehood, the University of Bradford Council member revealed that, despite excelling in the education sector in her professional career, during her school days, she struggled with basic spelling.

Indeed, it wasn’t until she was in her early 40s that she was diagnosed as dyslexic.

“I wasn’t diagnosed when I was at school because people didn’t know what is was then. I was simply classed as ‘stupid’. I was good at maths but my spelling was atrocious. It wasn’t until I was in my early forties, while working in Milton Keynes College, that I was diagnosed.

“I was surprised but it was also really great because it meant I could tell students that even if you are dyslexic, you can still go places. I was lucky because I had people who believed in me - if I hadn’t had people like that, I wouldn’t be where I am today.

“We had a learning philosophy at Activate Learning that says your brain is like a muscle - if you don’t use it, it gets flabby. Anyone can be clever, but you have to work at it. The harder you work, the cleverer you become.

“The next part is all about motivation. You have to find something you are motivated by.

“Third, your emotions are your biggest trigger. Emotions switch off your prefrontal cortex and stop you learning, so you need to be in an environment where you feel emotionally secure. Once you understand these three things, you understand why you're learning, and you see a purpose in it.

“I don’t care what your background is, when these three things come together, if you work hard, anyone can achieve at a high level.”

Dame Sally, who stepped down as chief executive of Activate Learning in April 2022 and who now delivers training and coaching to senior leaders, says she sees huge potential in Bradford.

“I see hope and inspiration and I think winning City of Culture 2025 has helped focus that. I also think the university has a very ‘can do’ attitude in terms of wanting to make a real difference in people’s lives.”

Asked how she felt about receiving her DBE, she said: “I was humbled and surprised but for me, the honour was more a recognition of what further and higher education does for people.”

Dame Sally is a keen advocate for vocational education and was President of the Association of Colleges from July 2020 to October 2022. She was given a CBE in 2013 for services to education. She has chaired and been a member of a range of local regional and national boards. She is also chair of Learning with Parents.

A University of Bradford student has been awarded an OBE in recognition for her exceptional services to international trade in the first honours under King Charles III.

Sharon Jandu, 55, who is studying for an MBA with the University’s School of Management, carries years of industry experience in project management and business delivery and is passionate about Bradford, where she has been a magistrate for 15 years.

She said: “I have a  boutique marketing and business consultancy based in Bradford and I've been a Bradford magistrate for the past 15 years, so I'm very connected to the city. I’m very passionate about what I do and I really do want to make a difference.”

Sharon is one of the founders of the Yorkshire Asian Business Association and founder member of Northern Asian policy think tank, and a charity called Global Diversity Positive Action, which looks to rehabilitating young offenders and supporting challenged communities. She is a fully qualified careers advisor and then was head hunted to work for the Institute of Financial Accountants for 14 years, before moving to work for Santander, where she was Head of Partnerships for global brands such as Google, Apple, and Microsoft, where she later moved on to.

She said: ”I always say if you really want to know what's happening in your community go to court because you meet the most vulnerable people from the most vulnerable communities, in 2015 that led me to set up Global Diversity Positive Action, which was supposed to be a small project to help vulnerable young people on the cusp of custody but because of the challenges in society become a  charity.

“I left Microsoft in 2017 because the charity needed attention and I also took the opportunity to focus on YABA which led to the establishment of the Northern Asian Power Network, I realised I was a good entrepreneur but I didn't know how to scale a business and that’s  which I why I enrolled on the MBA, the MBA has been transformative for me.

Despite her business acumen, Sharon admits that when she first received notice of her OBE, she  thought it was a scam.

“It was November and I received an email saying I’d been nominated for an honour and would I accept it, so I thought it was just spam. Then I got another email from the Cabinet Office saying if we don’t hear from you in seven days, we will take it you don’t want to accept the honour, so I rang the number and, was just really quite stunned and humbled. I just thought, ‘Oh my God, how lovely’.”

Her OBE has meant Sharon has re-prioritised some of her projects, including to lead trade missions to the Indian Sub-continent.

She adds: “I’m passionate about supporting young people, to give something back to the community, and to promote the international trade initiative. I’m also passionate about the benefits of education, which is why I am studying the MBA. Getting the OBE means many more doors have now opened.”

Find out more about our MBAs

Our Master's in Business Administration (MBA) could be the next big step in your career. Develop the strategic, financial, and leadership skills you need to perform at the highest levels of an organisation. Succeed as a manager, entrepreneur, business owner, academic, or consultant. Select this link to find out more.