Civil engineering students from the University of Bradford were given a private tour of the ongoing restoration work at Bradford Odeon.

The visit was organised by Professor Mostafa Mohamed, Head of Civil & Structural Engineering in the Faculty of Engineering & Informatics.

Several staff and around a dozen students were taken around the interior of the building by RN Wooler site manager Harvey Craven, who explained some of the construction methods used in the original 1930s build and alterations made in the 1960s, together with the current plans to revive the iconic building.

Originally built in 1930, the magnificent art deco building is undergoing a multi-million pound restoration thanks to Bradford Live, a not-for-profit distribution social enterprise, led by local business people, to create a live music venue after inviting developers to submit commercially viable ideas for the building.

Third year civil engineering student Anisa Tariq said: “I really enjoyed the tour because it gave us a chance to see the things we have been learning about in class in practice, and it gave us a good insight into construction.” 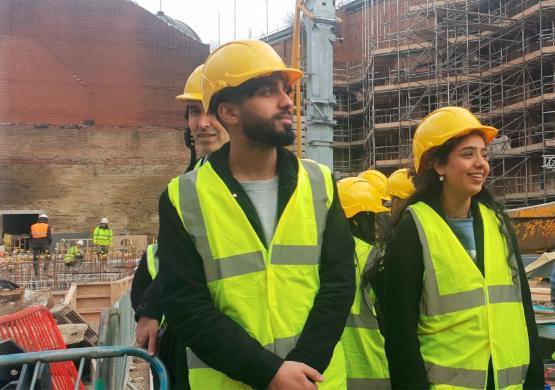 Nabeel Shakeel, also a third year, said: “I think it’s really good for the city, because it’s bringing an existing building back into use - and that is a great example of the ‘circular economy’. I think it will be really good for the Bradford economy in the future, and in terms of the visit, it has given us a real feel for how projects like this work.”

Dr Mohamed said: “The visit was beneficial for the students to see a live project and how learned teaching is applied in real life. This is a significant project for the city, for many years there was a debate regarding potentially demolishing the building, in the end it was decided the building would be renovated - I believe keeping the building was the right decision. It is also in keeping with the UN Sustainable Development Goals which will be taught as part of our new architectural programmes.”

History of the Odeon

The venue opened in 1930 as the New Victoria, and was the biggest cine variety theatre outside London and the first in the UK to be purpose-built for screening ‘talkies’.

The original 3500-seat auditorium doubled up as a concert hall, hosting the likes of the Beatles, the Rolling Stones and Tom Jones. It was renamed as the Gaumont, before being split up into a two-screen cinema and a 1,000-seat bingo hall in 1969.

The cinema’s art deco ballroom became a third screen in 1988. The Odeon closed its doors in 2000 and has been empty ever since. It fell into disrepair and was added to the Theatres at Risk register in 2008. Yorkshire Forward bought the building for £2m in 2003, but a plan to demolish and replace it with offices was scrapped when the regional development agency itself was abolished in 2012.

Ownership of the Odeon was transferred to the Homes and Communities Agency who in turn handed it over to Bradford Council for £1 in 2013. In 2014 the council approved a plan by Bradford Live to revive the landmark.

It will now become part of the city’s growing cultural offering, standing alongside The Alhambra, St George’s Hall, and the National Science and Media Museum.

Once complete, it will create a 4,000-seat arena, together with a host of bars and other areas.