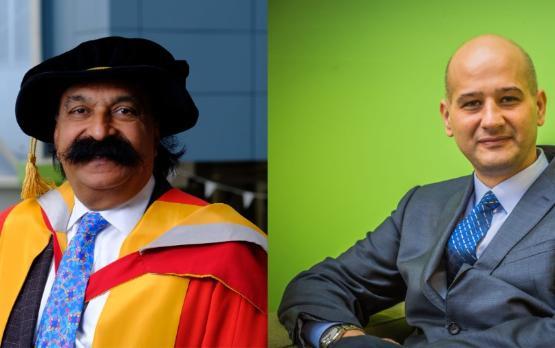 The chair of Bradford District Economic Partnership, and honorary graduate of the University of Bradford, Dr Manoj Joshi MBE DL, has renewed calls for a new Bradford rail hub.

His comments come on the same day (July 27) as the House of Commons Transport Committee called on the Government to review its recently published Integrated Rail Plan for the North and Midlands.

“This is about levelling up, it’s about releasing the potential of our young people, to ensure they achieve their aspirations, and also for the district to realise its own potential in terms of jobs, mobility and levelling up. We have an ambitious growth plan for our young and vibrant population, but we cannot achieve that without connectivity. How can the fifth biggest metropolitan city and district in the UK be left without adequate connectivity?”

He added: "The University has a key role to play in the future economic recovery of the district. It is itself a major employer and so has a direct impact on the local economy, it also helps bring in significant numbers of people from outside the region, including from overseas, but beyond that it is an exemplar of promoting the improvement of social mobility, and promoting levelling up."

In June, Deputy Vice-Chancellor Professor Zahir Irani travelled to Westminster to meet with then Chancellor Rishi Sunak to press the case for a new rail hub. Prof Irani, also presented the Chancellor with a copy of the Bradford Economic Recovery Plan (2021-2026), of which he is the chief architect.

The committee report calls on the Government “to ensure this once-in-a-generation investment in rail is not a missed opportunity to address regional imbalances” and says “a full analysis of the wider economic impacts” is needed in order to “to connect the great cities of the north to build a northern powerhouse”.

Chair of the Transport Committee, Huw Merriman MP, said: “We welcome the scale of the Government’s promised spending on rail. At £96 billion, the Government has billed it ‘the largest single rail investment ever made by a UK Government’. The Committee agrees it has the potential to transform rail travel for future generations.

“However, many towns and cities are already disappointed by the proposals which have been set out. The Prime Minister promised that he would, with Northern Powerhouse Rail, do for the North what he did for Londoners with Crossrail. Instead, much of the track will be an upgrade of existing line. The business case of HS2 was based on it going east to Leeds. Now, it stops in the East Midlands without any understanding of how much money is saved.”

He added: “We ask Government to revisit the evidence base for the decisions they have reached. In recommending this reassessment, we are mindful of a previous Transport Committee report which challenged the Government on its ability to deliver major infrastructure projects. Ministers must be cautious but transparent about the benefits that can be delivered by the Integrated Rail Plan. It is ambitious and exciting but public and stakeholders, especially in the North and Midlands, must be able to see that the benefits of the current proposals outweigh the other options which have been put forward.”