Consumer is king when it comes to marketing, says hon-grad Prof Stephen Greyser 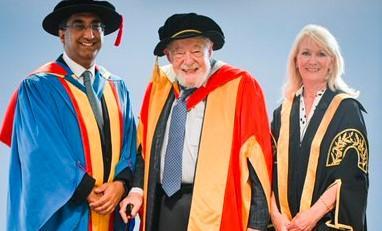 On Tuesday 19 July, Professor Stephen A Greyser became an honorary Doctor of the University of Bradford, during what must have been the hottest ceremony of the week.

Stephen is a graduate of Harvard Business School (HBS) and its Emeritus Professor of marketing and communications. He has been active in research and teaching at HBS since 1958, specialising in brand marketing, advertising, corporate communications, the business of sports, and non-profit management.

An editor at the Harvard Business Review and later its Editorial Board Secretary and Board Chairman, Stephen is also responsible for 16 books, numerous journal articles, several special editions of journals, and over 300 published Harvard Business School case studies.

At Harvard Stephen developed the Corporate Communications elective, creating many case studies and articles on issues management, corporate sponsorship, and relations between businesses, the media and their publics.

Stephen co-created the concept of heritage brands and led research into corporate communications concepts, including explorations on the branding, identity and reputation of the Nobel Prize.

He created and teaches Harvard’s Business of Sports course, is a member of the University’s Faculty Standing Committee on Athletics, has served on the Selection Committee for the Boston Red Sox Hall of Fame, is on the board of The Sports Museum, and has authored numerous Business of Sports cases and articles.

On receiving his award Stephen congratulated his fellow University of Bradford graduates and commented on how “at home” he felt being in Bradford, having met with senior members of the Faculty of Management, Law and Social Sciences many times, as well as attending its advisory board.

Stephen talked about his life’s work to understand consumer and customer behaviour, including how people make decisions on what they buy or invest in, and the important role of trust in this. He also shared his motto: “the consumer is the alpha and omega of marketing.”

He concluded by saying: “I am pleased to celebrate with you and accept this honour with much happiness and appreciation.”