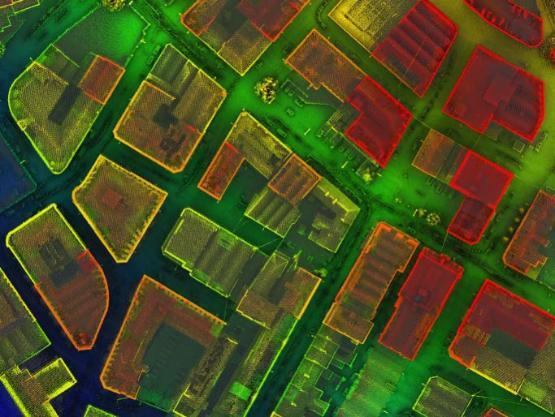 It might sound like science fiction but in the near future people in Bradford will be able to explore virtual replicas of buildings before they are built, take tours of the city to see what it looked like in Victorian times, and check live pollution counts so they can decide which route is safest if they are on foot or cycling.

All of this activity - and more - will take place inside an online space called Virtual Bradford, a high resolution 3D online twin of the city centre, which is expected to be completed by the summer. The project is a collaboration between the University of Bradford and the council, and part-funded by the European Union SCORE project.

Watch a YouTube video showing the level of detail of Virtual Bradford here.

Researchers from Visualising Heritage - visualisingheritage.org - a research team from the School of Archaeological and Forensic Sciences at the University have spent months collecting laser scan data, digital imagery and drone data in order to develop the digital twin.

Professor Chris Gaffney, Chair in Archaeological Sciences, says: “Virtual Bradford represents a revolution in terms of city planning. It will enable people to look at the built environment in a virtual 3D world, and then see what impact new developments have on things like surface water drainage, noise pollution, clean air and visual impact.”

The project is already being expanded with funding from the Arts & Humanities Research Council (AHRC) to include the UNESCO world heritage site of Saltaire, using the Canal Road Greenway cycle route as a link. New funding will be used to create a digital record of the site and develop a tourist app.

Professor Christopher Smith, AHRC Executive Chair, said: "This is a core part of AHRC’s continuing and growing commitment to research and innovation across the United Kingdom, showing how arts and humanities can support flourishing individuals and communities, create economic and social opportunity, and inform policy and decision making."

He said: “One of the biggest issues Virtual Bradford will contribute to is clean air, and it will help to support the creation of ‘active travel neighbourhoods’, the whole premise of which is to limit through-traffic on local roads to make them safer, and thereby promote cycling and walking as part of everyday leisure activities. Saltaire is one of three trial locations and we are in the process of linking that to the existing Virtual Bradford model via the Canal Road Greenway.”

Cllr Alex Ross-Shaw, Bradford Council’s Portfolio Holder for Regeneration, Transport and Planning, said: “A lot of Virtual Bradford’s initial uses might be things like planning, air pollution and traffic modelling but we think it will grow organically, as people start to realise its potential.

“We’d love to see developers submit 3D planning applications. It will also allow people to see how proposed developments affect skylines and what buildings look like from different angles.

“Another potential use is to invite artists to submit projects, and we are already working on virtual historical tours that show what the city looked like in the past. There’s also potential for this to be used by film production companies who want to use the city as a backdrop.

“One of the most interesting ideas at the moment is to enable residents to access live air quality readings, so they can choose their preferred routes if they are on foot or cycling.”

Virtual Bradford is thought to be the first open-source 3D replica of a city in the UK - organisers hope it will also act as a platform for new cultural developments, just as the city bids for UK City of Culture 2025.

The project is due to be completed by this summer, but work has already begun on extending it to include Saltaire and the Bradford Greenway.