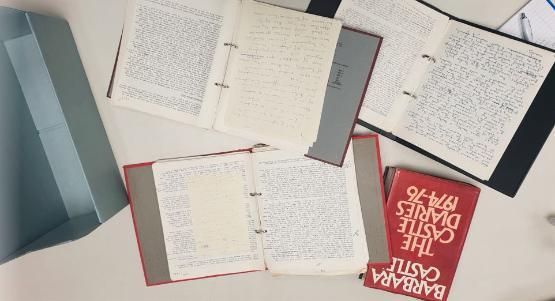 On May 3, it will be 20 years since Labour MP Barbara Castle (1910-2002) died. An MP from 1945 to 1979, she is rightly considered one of the most significant Labour politicians of our time, introducing welfare reforms such as the Family Allowances Act 1945 (now known as Child Benefit) and the Equal Pay Act 1970. As Transport Minister, she was also responsible for the introduction of breathalysers, compulsory seat belts and national speed limits. Her annotated diaries form part of the University of Bradford’s Special Collections - held within the J B Priestley Library - which last year achieved a National Archive Service Accreditation award for a second time. The University has also recently received accreditation from the Living Wage Foundation. Since 2015 the University has matched the real living wage for all staff and has now received formal recognition through its accreditation from the Living Wage Foundation.

Described in an obituary in the Telegraph & Argus in 2002 as a “left-wing flame-headed political tornado”, Barbara Anne Castle, although born in Chesterfield, grew up in Toller Lane and attended Bradford Girls Grammar School, entering politics during the 1945 Labour landslide as MP for Blackburn.

The Castle Diaries 1964-1976 were published in 1980 but the original diaries reside in the Special Collections archive at the University of Bradford. The typed script is heavily annotated with hand-written musings, on everything from insidious colleagues and the pitfalls of politics to daunting TV appearances and preparing for Christmas parties.

Professor of Modern European History Munro Price said: “This is a remarkable manuscript, with many notes and annotations absent from the published version of Barbara Castle's diaries, and a major source for 20th-century British political history. It underlines, if any underlining is needed, just how rich and significant Bradford's Special Collections are.”

The notes offer a frank, honest insight into what it was like during one of the most tumultuous periods in British history. Aside from giving fresh perspective on already well documented historical events (like the devaluation of the pound in 1967 and the lowering of the voting age to 18), they show the real determination, grit and humanity of a woman who was a trailblazer, a reformer, and who at one point was touted as a possible future prime minister.

Handwritten, often scrawled in the margins or pinned (literally, with actual pins) to the page, the jotings extend to her disdain for the Cambridge Union debating society, rivalries within the Cabinet, how her colleagues got “cold feet” over plans to lower the voting age to 18, how Harold Wilson (The University’s first chancellor) lost his confidence, and her constant struggle to find time to get her hair done.

Here, we take a brief look at just a few of those hand-written notes from 1967. 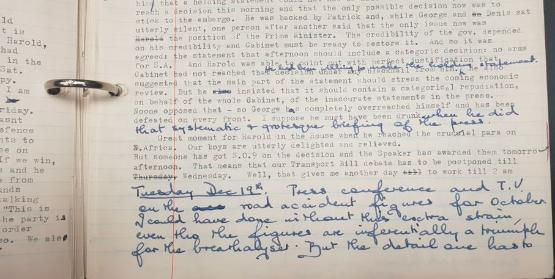 Went to Cambridge Union - merely to oblige [Baroness] Ann Mallalieu - to oppose a No Confidence motion. It was the biggest attendance at any debate since the war but they had only come to roar with laughter at every other word. Heckling I enjoy but this was puerile. It will be a long time before I go to the Cambridge Union again.

Harold [Wilson] has helped me by calling a Cabinet to clear my W.P. on Railway Policy. I explained it was urgent to get this out quickly, since my hand had been forced last week over [Sir Stanley] Raymond’s [1913-1988] dismissal. Ray further tried to make trouble ever thus. I know he hates me (Ted tells me he never disguises the fact when he’s with journalists) but it was more than I could stand when he came out with a venomous attack about the way in which I handled it - “dragging the chairman of the board out of an important meeting to give him the sack”.

Damn it, I should never have had to do it if Ray hadn’t leaked to the ‘Rail’. So I snapped back that my hand had been forced by a leak which, according to the journalist, had come from ‘someone round this table’. The fat was in the fire that night!

…Back on the night sleeper for breakfast with Mr [Arthur] Knight… (1917-2003) Director of Courtaulds [textile firm], at his house at Radnor Place, W2. For a business tycoon, the house was surprisingly modest - one of these little new ones that are getting squeezed into old roads all over London… we have been considering Knight for the Finance Member for BRB [British Railways Board] and I doubt not he would make an excellent one…

…we decided not to commit ourselves while there had been a debate in the House - particularly on the implications of the proposals for the lowering of the voting age to 18. Some members of Cabinet are getting cold feet about the latter, even though it is party policy. They would go to the lengths of holding up legal reforms rather than risk encouraging it. I hissed to Wedgy [Tony Benn, then Anthony Wedgwood Benn]: “They want [‘We are going to’ is crossed out] to cook the books against the young because we are afraid they won’t vote for us.”

Our first ever Guy Fawkes party at HCF [her residence, Hell Corner Farm, Ibstone, Buckinghamshire]. Miraculously, the downpour stopped at 5.30pm. Terry and Ted [her husband Edward Castle (1907-1979) got a huge bonfire going, erected a tarpaulin and built up planks for seats… A heart-warming family memory.

Harold has circulated a Top Secret heavily sealed document about the economic situation. Devaluation [of the pound] has failed to work and the situation is “menacing”. Emergency measures would have to be taken immediately after the recess. Meanwhile, he is just putting us in the picture. [‘I wonder why?’ is crossed out]. Certainly, his optimistic talk of “breakthrough” has proved wrong. Wonder why experts are falling off so disappointingly? And our old friend, lack of “confidence” is back again.

TV appearances are trying when one is tired and hasn’t had time to have one’s hair done. We played it very cool, expressing early “cautious optimism”... worked again till 2am completing my speech. Condensing 169 clauses into a… speech is a real headache.

An impossible day: NEC at 10am (no need for a fight on S.A. now), then Cabinet (during which I worked on my PQs): ever to the house with my speech still to read and shorten. Anne arrived with early part of it at 2pm and when I went in for questions, the last pages had still not been typed! The Civil Service is really appallingly equipped… It takes an age to get anything typed, however life and death. Result. I was having to drop whole paras [sic] out of it as I was reading it at the dispatch box, with one eye on the clock.

However, it went quite well and it is clearer than ever the Tories would have no real grounds on which to attack my Bill if it were not for the wear and tear tax which was forced on me in the last PESC exercise…

It is finished: except for Cabinet. Harold has had to go to Australia for Holt’s funeral so George is in charge and he has kept chopping and changing the time… I’ve nearly gone mad. Finally, he fixed 3pm with 6 items on the list, only 2 of them really urgent. I am furious: how am I to get ready for 50 guests at our party tomorrow night? Spent the morning on frantic Christmas food shopping and having my hair done, then sat choking for two hours in Cabinet while they all talked and talked. Finally skipped out leaving them to it and sloped off to HCF. They have no sense of priorities.

The party was a great success. We had charming notes from the Cohens and the Adams, saying what an ideal setting the farm is for the traditional Christmas. And so it is. Spent Saturday cleaning up the mess (8 glasses smashed, a record, so it must have been a good party). The minibus to take people home worked perfectly. Absolutely nobody drank and drove.

Then we had to get ready for the family party to arrive and for the children’s party on Christmas Eve. Ted was feeling under the weather and horror of horrors!! Mrs Bracey collapsed with the flu on Christmas morning. So did Mother and Ted following suit on Boxing Day. Somehow I struggled through alone with various people lending a hand when they could spare a moment from their children.