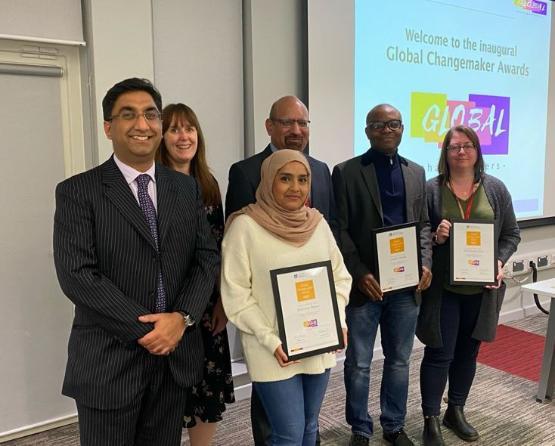 From libraries in Afghanistan to social justice in UK

An awards ceremony designed to celebrate students who have set out to change people’s lives for the better has been held at the University of Bradford.

Global Changemakers is the brainchild of Bradford philanthropist and business coach Dr Zulfi Hussain MBE - the inaugural awards were held this week.

Zulfi said: “We are so pleased to have held our very first awards ceremony at the University of Bradford. Our vision is to create a global network of changemakers - in other words, to connect people who are making a difference in the world through different projects, and those who want to, the end goal being to bring about positive social change.

“We will continue to work closely with the University, working with students, staff and alumni on future awards ceremonies. In the long term, we aim to expand these awards to businesses and even other universities, running bootcamps, mentoring schemes and an annual summit to showcase what has been done.”

Zarmina Rasouli, originally from Afghanistan, is studying an Executive MBA. She has a degree in economics and has worked extensively in the development sector, with a particular focus on gender equality and empowering women, working with organisations including Oxfam, Deutsche Welthungerhilfe and ActionAid. Since January 2020, she has worked as a National Manager of Gender Equality and Women’s Empowerment at the Aga Khan Foundation, Afghanistan.

Through numerous programmes and initiatives, she has helped establish over 50 libraries and resource centres, giving more than 2,000 women access to learning, as well as 15 village-led child protection committees designed to raise acceptance of girls’ education - part of this involved improving school infrastructure to the level of creating separate male and female washrooms.

Despite threats on her life, she has persevered to increase awareness of women’s rights from Islamic perspectives, national laws, and international conventions, including boosting the number of women and girls who receive primary education.

She said: “The journey I started over 15 years ago to empower Afghan women and girls has helped me understand my personal abilities, capacity, and role as a woman. My activities in this field were accompanied by many ups and downs, sometimes even involving threats on my life.

“Afghan women and girls have the motivation and potential to improve their lives, but continued war and political instability, poor rule of law, poverty and the cascading, multi-dimensional effects of the COVID-19 pandemic hold them back and affect the sustainability of all development efforts.

“It is imperative to end the protracted conflict, to support Afghan women and girls to sustain and build upon the positive changes brought about in the last two decades, and to address other persistent barriers to the realization of women’s human rights.”

Final year social sciences student Kulchuma Begum also received an award. She, along with others, set up the Social Justice Society in her first year, which has initiated numerous events to benefit those in need, including donating toys, food and nappies to women’s refuges, organising raffles and webinars, including one which attracted over 500 people and was used by the local authority as part of a training session for social workers.

Kulchuma, originally from Preston, moved to Bradford 13 years ago and previously worked in the education sector.

She said: “Setting up the society involved a lot of work, including researching how to set up a society. We wanted to give something back to the community. It’s also important in terms of giving students first-hand experience of social work and we are currently looking to find first year students willing to take the society forward.”

She chose to study in Bradford because of the high level of support.

She added: “I worked in various educational settings with children, including family support but I never did A-levels, so when I first applied, I did not get in. The University’s Outreach and Recruitment team gave me guidance on how to get more points. When I reapplied, I received offers from all three of my choices but I chose Bradford because it just felt like home and the staff were brilliant.”

Academic Registrar Nikki Piece said: “I am so proud to have supported our first Global Changemakers event last night. At University of Bradford, our vision is a world of inclusion, where people want to, and can, make a difference. Last night, we were proud to celebrate some of our students who have done exactly that, by making our first Global Changemaker Awards. I always say that our students are amazing, and last night was another example of how true that is.”