Published: Tuesday 5 May 2020 by Neil Hudson 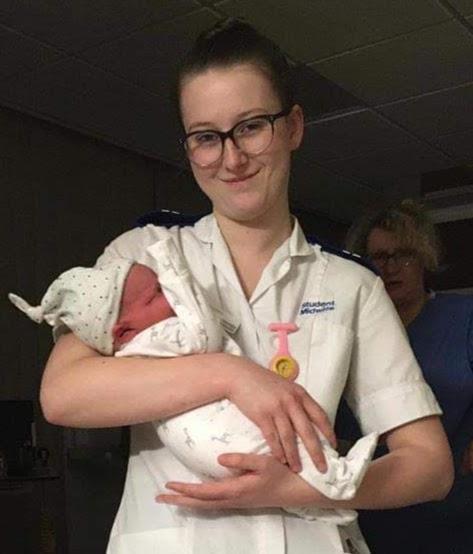 Celebrating the role of midwives on International Midwives Day 2020

As the world celebrates the work of midwives - and as the University of Bradford sends 40 of its student midwives into practice during the Covid-19 pandemic - we talk to three about why they are joining one of the most challenging and rewarding of professions.

Georgia Parker, Holly Stockdale and Ten Mabhara are all in their second year of a BSc midwifery studies degree course in the Faculty of Health Studies at the University of Bradford.

On International Midwives Day (May 5), they speak about their experiences.

Georgia, 19, grew up on a farm near Skipton and despite her practical upbringing says midwifery was not something she initially considered as a career. A former pupil of Skipton Girls High School and South Craven School, she described the role as “a privilege”.

She recalls crying the first time she was involved in a delivery and says there’s a “sense of belonging and being able to help” while working on a labour ward. She even spent one shift speaking French (she studied it at A-level) after a woman's partner could not speak English.

“It's so rewarding. You are helping someone at a time in their life they’re never going to forget and the fact you can become involved in that is a privilege. Getting cards, hugs and ‘thank yous’ from women and families is a huge thing for me, knowing that you've made a difference and supported someone gives you a huge sense of fulfillment. If it's what you want to do, there’s nothing else like it.

“It’s also quite diverse, so there are lots of things to specialise in. A large part of the course at Bradford is practical and I find even when it’s a 12-and-a-half hour shift, the time flies by. Every day is different.”

Holly is a mother-of-three who worked as a nursery nurse before realising she wanted to become a midwife.

“When I left school, I didn’t know what I wanted to achieve long term,” says the 30-year-old, who lives in Masham. “I also lacked academic confidence which held me back. I'll admit I knew very little about what a midwife’s role was before I became pregnant. I now have three children, but each pregnancy and birth is different, but every bit as daunting as the first. You are in such a vulnerable position, with what feels like very little control. The compassionate care I received not only empowered me during my pregnancies and births but also inspired me in pursuing midwifery as a career.

“Having been on the receiving end of midwifery care, I feel privileged when caring for women and families at such an important life event. Bradford came highly recommended by those already in the profession, because of the unique way in which the course is taught, using problem based learning at the core. At first I was apprehensive and felt a little out of my depth, but it has without a doubt helped me to become more resilient, self-aware and able to overcome challenges both academically and while on placement.”

“It took me 10 years from when I first realised that midwifery was the career for me, the more I learned about it, the more it enthralled me. Being truly with women and supporting them to have a positive birth experience motivates me further.”

Ten Mabhara, 24, grew up in Zimbabwe and emigrated to the UK as a child. She chose Bradford to study because of its “positive reputation when it comes to the quality of the experiences”, adding: “There is actually a saying around  in the midwifery world: ‘If you can work in Bradford, you can work anywhere'.

“I have a strong belief that midwifery is not just a job but a passion. Midwives give their all to support and be with women in their most vulnerable moments. We’re professional friends, advocates for women and most importantly help to empower themselves. Midwives become a part of so many women's histories and life stories, and it truly takes a special kind of person to be a midwife. I have met amazing women and midwives as a student and only hope to be even half as good as they are."

She now teaches both undergraduate and post-graduates, all of whom spend half their time in the classroom and remainder out in the clinical practice, working in hospitals across the district. The midwifery programme is recognised nationally for its problem based learning curriculum.

The university is sending 40 students out into practice during the Covid-19 crisis.

Commenting on the present Covid-19 pandemic, she said: “There is a bit of apprehension, amongst the students going out into practice, of course. The crisis has impacted on services and staffing, with quite a lot of service reconfiguration. The students want to support their practice colleagues and help provide care to women during this time, but we must also ensure students can be appropriately supervised in the midst of a crisis. We are working closely with our Heads of Midwifery and practice partners to enable the final year students to complete their programme.”

“The appeal [of midwifery] is the uniqueness of the relationship you are able to build with women by working in partnership with them to support them through their pregnancy, birth and transition to parenthood. Most of the time, we are working with well women, but the students will also be working with women with more complex health needs. The students work in a range of settings which offer a rich and diverse learning experience. They recognise the privilege of being part of those communities and having the opportunity to support women and their families at such an important time.

Karen says that while nationally there is a recognised shortage of midwives, maternity services are also undergoing structural change, with a view to providing greater continuity of care for women to improve the quality and safety of care.

“We know the experience of giving birth can have a lifelong impact on health and mental wellbeing, so this is about reducing some of those issues by strengthening the continuity of care so that women know their midwives and feel fully supported throughout the whole experience.”