How Virtual Reality Is Helping Refugees in Jordan and Beyond 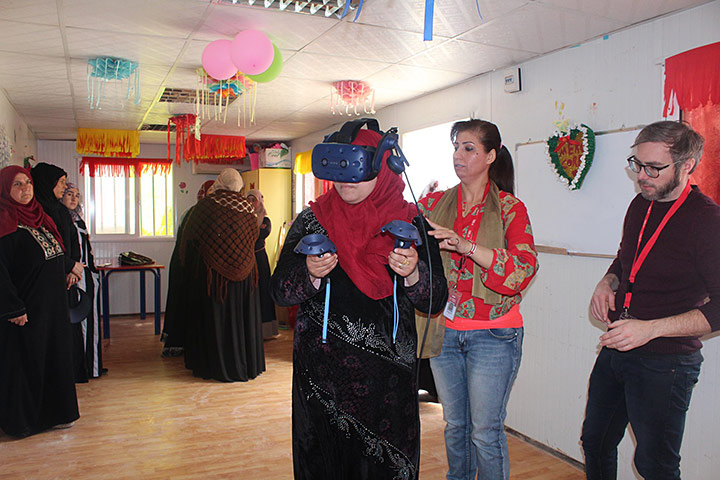 Global organisation Mercy Corps and the University of Bradford pilot VR tech to help refugees reconnect with their homeland.

The global organisation Mercy Corps is partnering with the University of Bradford’s Building Resilience Through Heritage (BReaTHe) project, to help Syrian refugees in Jordan improve their psychological and emotional wellbeing.

With more than 630,000 Syrian refugees in Jordan, the partnership is leveraging the latest technologies to deliver virtual reality (VR) experiences to help individuals and communities reconnect with and discuss the heritage of their homelands. The project is an important element of Mercy Corps’ psychosocial programming in Azraq refugee camp to ensure that participants are working through these emotions in a safe and productive way.

For the younger generation who only know Syria in war, VR — along with other methods of promoting cultural heritage such as traditional stories, recipes or family photos — can create a connection to their homeland that is a source of pride and strength. This can also strengthen bonds with older generations as they feel more connected to the places their parents and grandparents reminisce about.

Although the project is in its early stages, the reaction from participants has been overwhelmingly positive. “We aren’t able to see Syria with our own eyes, but through VR, you brought Syria to us,” said a participant after experiencing the project.

Simon O’Connell, Executive Director, Mercy Corps says: “As an organisation we believe that technology has a huge role to play in improving people’s lives. We’ve seen first-hand the impact that VR can have on a Syrian mother who has been displaced from her home for many years. Being able to return virtually to that home, experience it in some way again, which helps her deal with the trauma of war, is powerful and important.”

Dr Adrian Evans, from the University of Bradford said “It’s a profound and humbling experience to work in refugee communities. We’re delighted to see our digital heritage tools and expertise being useful to those in desperate need of positive memories and experiences to build personal and societal resilience.”

The project will be showcased at this year’s Royal Highland Show in Edinburgh where Mercy Corps and the University of Bradford will be demonstrating the impact of Virtual Reality in the aid sector as part of the UK Government marquee from 20-23 June 2019.