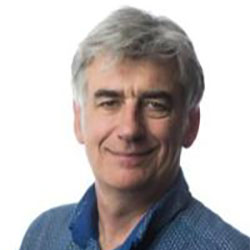 Stephen Rimmer is Professor of Chemistry and Head of the School of Chemistry and Biomaterials Chemistry at the University of Bradford. He was awarded a PhD in 1992 (Imperial College) for work on polyurethane graft copolymers. He spent a total of six years in industrial research and development (Macpherson Polymers Ltd. and Biocompatibles Ltd.) and two years as a post-doctoral fellow with Prof. J. R. Ebdon. His time in industry included development of many commercialised coating formulations and a new contact lens (The ProClear lens). In 1995 he was appointed to a permanent independent post as lecturer at Lancaster University and in 2000 he moved to the University of Sheffield. In January 2012 he was promoted to a personal chair and the took up the Chair of Chemistry at the University of Bradford in May 2015. His research interests can be divided into two main areas: (1) synthesis and (2) biological applications of functional polymers. The two areas frequently overlap as polymers for medical applications are prepared. The group enjoys significant expertise in synthesis by radical, cationic and ring-opening strategies as well as applications that are focused on the use of stimuli responsive polymers, peptide functional polymers, functional hydrogels and production of functional particles. He has been awarded over £6 million in funding from various research councils (EPSRC, BBSRC and MRC), charities (Wellcome, Nuffield) and a large number of industrial concerns. In 2006/7 he was funded to a MRC discipline hoping fellowship, which allowed him to carry out work on the interactions of macrophages with synthetic hydrogels.  He has published 127 peer-reviewed articles and 12 book chapters and reviews and is inventor on 14 filed patents.  He was also founding chair of RSC’s special interest group in Biomaterials Chemistry.

I teach Polymer Chemistry to 3rd year and masters students over34 lectures. I also demonstrate some laboratories in 1st year as well as supervising both Chemistry and Medical Bioscience masters projects.

Our work is focused on the synthesis and properties of functional polymers. We enjoy good collaborative relationships with large sections of the polymers and biomedical devices industry. Functional polymers are produced using a variety of methods including radical, cationic and ring-opening polymerisations as well as step-growth techniques such as polyurethane synthesis. We also make extensive use of polymerisations in disperse media; such as emulsion polymerisations. Recently, one of our focuses has been on producing functional hydrogels to support cells for applications in tissue engineering. Here our aim is to control cells as they develop and grow and to examine how the structure of the materials affects performance and cell compatibility. Another strong theme is to use functional polymers to detect pathogens in infective diseases and here we are developing unique medical devices for use at the point of care. Many of the polymers are complex materials and analysis is difficult. To achieve full characterization we use a great deal of expertise in chromatographic techniques, advanced mass spectrometry and nuclear magnetic resonance spectroscopies; often coupling these techniques together.