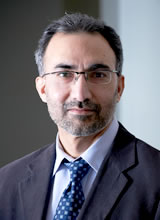 Professor Awan was partly seconded to Namal College, an associate college of the University of Bradford between 2008 - 2011 to act as its first Vice-Chancellor.

His research focuses on Network Security, Cyber Security, Performance Modeling of Cloud and Communication Networks. His research work won Best Paper Awards from 24th IEEE AINA 2010, Australia and 8th BWCCA 2013, France. His research work has been published in IEEE Transactions, IEE Proceedings, IEEE Computer Magazine, among others. He is a member of editorial board of the Elsevier journal of Simulation, Modeling and Practice and served as a guest editor for various special issues. Professor Awan organised and chaired several international conference and workshops and edited proceedings. He has successfully supervised 34 PhD students and 10 students are currently registered for PhD under his supervision. Professor Awan is a fellow of HEA, fellow of BCS and member IEEE.