Bradford alumnus honoured at the Duke of York Awards 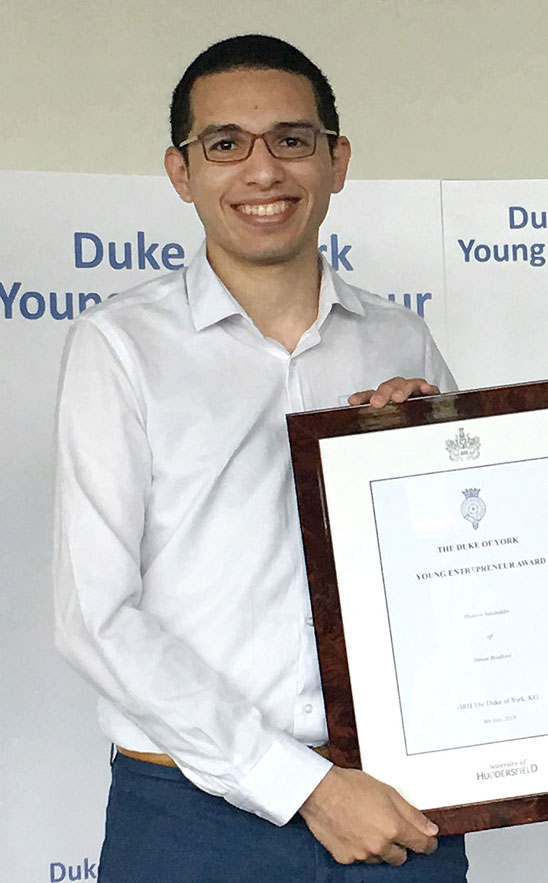 A recent alumnus of the University of Bradford received Royal approval from HRH The Duke of York for demonstrating ‘remarkable entrepreneurship’ after founding his company, Bradford Diwan.

A recent alumnus of the University of Bradford received Royal approval from HRH The Duke of York for demonstrating ‘remarkable entrepreneurship’ after founding his company, Bradford Diwan.

Hussein Muhamed Salahaldin Hussein collected The Duke of York Young Entrepreneur Award from The Duke himself at the annual awards ceremony, organised and hosted by the University of Huddersfield. The awards have been running since 2013 and are open to student or graduate entrepreneurs in the north who, through their businesses, have had a real impact either commercially or socially and have the potential for growth.

Hussein Muhamed Salahaldin Hussein established his business, Bradford Diwan, after graduating with a MA Political Violence and Terrorism from the University of Bradford in 2018.

The Bradford-based non-profitable social enterprise aims to provide an opportunity for people to explore and understand Muslim cultures through interactive languages education (Arabic, Urdu, Turkish, Swahili, etc.), arts, food, music and drama programmes and workshops.  In collaboration with Peacejam UK, the company offers two educational programmes (Circles of Salam) starting in September 2019 for peace-making and change-making education on a supplementary schooling basis for children. Both programmes will enable young Muslims and non-Muslims to become peacemakers and change makers and support them with the skills and confidence to change their world.

Hussein said “It is an honour to receive such an award and be recognised as a Young Entrepreneur of the year 2019. I feel overwhelmed and pleased to be representing my family, friends, the University of Bradford and the City of Bradford on a national scale. I hope that through my work I can make a positive impact in helping to create and promote peace”.

This recent award follows a trend of University of Bradford alumni to have been recognised for their entrepreneurship at the Duke of York Awards. Mustafa Al-Shalechy and Mohammed Ali Alshamari collected an award in 2017 for their new-start business, CurePharma, whilst Karan Aswani collected his award in 2016 for his business enterprise, Diamonds and Diamonds Ltd.