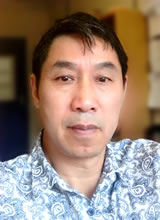 Tao is a senior lecturer in the School of Informatics at the University of Bradford, Director of Post Graduate Research EIMC, and a guest professor at Xian University of Engineering Science and Technology (XAUEST). He received his BSc degree in Engineering and MSc degree in Signal Analysis and Machine State Diagnosis at the XAUEST. He had been a lecturer in the department of Mechanical and Electronic Engineering at the XAUEST before earning the ORS awards to study for his PhD at the University of Leeds on the subject of Image Pattern Recognition and Analysis.

He was a research fellow on Physics-based Modelling in computer graphics, AI and Virtual Reality at the University of Bradford. He was appointed as a lecturer at Heriot-Watt University in October 1999. He joined the School of Informatics as a lecturer in August 2000.

Tao's research interests are focused in the areas of Digital Health, VR/AR technologies, Computer Vision, AI and deep learning, Computational Models for visualisation, Real-time Modelling and Simulation, Games technology, he has over twenty years of experience in Interactive system, VR reality, modelling and simulation and computer games technology, which include:

He has worked as a principal or key researcher for more than eight funded research projects and have been supervising eight PhD students with four successfully completions and had so far over 110 publications published in peer reviewed international Journals, book chapters and international conferences.

1. Computational methods for 3D visualisation and simulation, physics-based modelling and simulation of soft body, such as using FEM, and fluid dynamics

2. Biomedical/Medical Computing and Engineering and Applications

4. 3D flooding modelling and simulation for monitoring and management