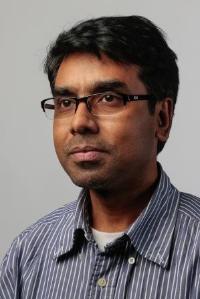 Currently Dr. Nasim is an Associate Professor in Therapeutics at the School of Pharmacy and Medical Sciences, the University of Bradford, UK. He is an Executive Member, Research and Knowledge Transfer Committee, Faculty of Life Sciences, University of Bradford, Local Ambassador, the Biochemical Society, United Kingdom, Adviser, the Commonwealth Scholarship Commission, United Kingdom, Executive Member, Global Network of Bangladeshi Biotechnologists (GNOBB). He has been the member of Editorial Boards of a number of international journals including Journal of Bioscience, International Journal of Perception in Public Health and acted as a Guest Editor for the journal Pain Research and Management.

His research interests focus in the broader areas of Translational Medicine (gene identification to drug discovery).  He has identified a few key genes that cause disorders such as Pulmonary Hypertension and blood cancer and identified novel diagnostics and therapeutics. Importantly, his discoveries are being taught at the university level and he is the inventor of a number of diagnostic and therapeutic patents.

His contributions to science include publications in scientific journals, articles to local and national Bangladeshi daily newspapers and intellectual supports to scientific community around the world. He has published 70 articles including research papers in journals like Nature Genetics, Nature Protocols, Nature Communications, Nucleic Acids Research, Human Molecular Genetics. His research has been extensively highlighted in news media across the globe as evidenced in his interviews with CBA News (USA), Labmate https://www.labmate-online.com/news/news-and-views/5/university-of-bradford/diagnostic-clues-found-for-pah/48687 (UK) and Daily Prothom-alo (Bangladesh). He writes regularly in newspapers including the Daily New Nation (http://thedailynewnation.com/news/250850/coronavirus--our-duties-to-prevent-and-halt-the-outbreak.html), the Daily New Age (https://www.newagebd.net/article/103938/are-face-masks-effective-against-coronavirus-disease), daily Jugantor, Daily Prothom-alo, RatdinNews (করোনা: লালমনিরহাটের বিজ্ঞানী নাসিমের নিবন্ধ)and Lalmonirhat Barta (http://lalmonibarta.com/details.php?mblogs=ODczNQ==) and edited books inaugurated by the Prime Minister of the Peoples Republic of Bangladesh.

He has been promoting science in Bangladesh. He is the founder and Chief Adviser of the organization called Centre for Health Agriculture and Socio-economic Advancements (CHASA), which was incepted in 2008 at Lalmonirhat, Bangladesh. Since its inception, CHASA has provided more than 150 scholarships to local students at various levels from primary to college and supported research projects at universities which resulted in a few scientific publications.

Dr. Nasim received his Ph.D degree from the University of Manchester Institute of Science and Technology (UMIST), UK. In his student life, he received 18 scholarships from various countries including Bangladesh, Switzerland, USA and UK. In fact, he is the first ever Bangladeshi student who received the Swiss Govt. Scholarship.

Dr. Nasim was a co-recipient of the Best Scientist Award 2008 of Lalmonirhat Municipality (Bangladesh) and received nomination for the ‘Best Non-resident Bangladeshi Scientist-2019’ of Global Network of Bangladeshi Biotechnologists (GNOBB).

Prospective self-funded Ph.D students interested in pursuing their research in the broader areas of Biochemistry, Molecular Genetics, Pharmacology, Drug Discovery and Translational Medicine are strongly encouraged to contact me (t.nasim@bradford.ac.uk) with a CV.  Additionally, we are supporting talented post-doctoral scientists interested in our research who want to apply for their own funding.

4. Development of a personalized therapy for pulmonary arterial hypertension (PAH)

Apply for one of our PhD projects - Postgraduate - University of Bradford

Faculty for the Future Fellowship

My key research interests are as follows:

PAH is a devastating cardiovascular disorder caused by narrowing of blood vessels in the lungs and in the absence of therapy leads to right heart failure and death. We have established that nonsense mutations in the BMPR2 gene underlie the majority of the inherited forms of the disease. BMPR2 mutations contribute to stoichiometric imbalance in the receptor complex leading to dysfunctional signalling (Nasim et al., 2008, 2012). Mutations are also found in the SMAD family genes but they represent an infrequent cause of the disease (Nasim et al., 2011). Mutations in the BMPR2 gene potentiate TGFb signalling (Nasim et al., 2012) and prostacyclins, the commonly used therapy for severe PAH inhibit this pathway (Ogo et al., 2013). Taken together these observations suggest that agents that inhibit the overactive TGFb signalling and/or promote the BMP signalling may provide protection in PAH. We identified some small molecule agents that restore the balance between the TGFb and BMP pathways and rescued abnormal proliferation and apoptosis in cell-based models of PAH (Siddiqui et al., 2013). Structure guided virtual screening identified additional compounds which elicited anti-TGFb activity in cell-based assays. A number of ‘leads’ have been identified through a medicinal chemistry programme (unpublished data). The major objectives of this part of research are to investigate (a) the molecular mechanisms by which the TGFb signalling is activated in PAH, and (b) therapeutic resolution of PAH by chemical agents including natural products and established drugs that restore the balance between BMP and TGFb signalling pathways.

There are more than 3000 genetic disorders including cystic fibrosis, muscular dystrophy and PAH caused by nonsense mutations. Agents that promote translation readthorugh may provide therapeutic intervention. We have established cell based assay system which is capable of screening drugs that promote translational readthorugh (Nasim et al., 2000, 2005, 2008 and patent applications). Using these techniques, hits have been identified through screening of a small molecule library, which are now being tested whether they rescue BMPR2-mediated cellular defects in PAH. The major objectives of this part of research are to (a) identify agents that promote readthrough and (b) test whether promotion of readthrough by small molecule agents can provide protection in PAH and in other nonsense associated genetic disorders.

Mutations in pre-mRNA splicing signals account for both inherited and acquired defects, are now increasingly recognized as causes of human diseases. Improvements of our current understanding of alternative splicing regulation may therefore provide opportunities to counter the consequences of mutation. Although many components of the spliceosomal complex have been identified, their roles in splicing regulation (e.g. activator or inhibitor) are not fully understood. We and others have reported the involvement of non-canonical proteins and micro-RNAs (miRNAs) in regulating splicing events, which suggest that this process is controlled by many more factors than previously thought. Hence, constructing a genome-wide map is essential in revealing the mechanisms involved. Identification of such factors and the characterization of ‘ex-vivo’ networks require a system capable of screening a large number of samples. The absence of a generic approach prompted me to develop rapid assay systems based on enzymatic and fluorescence activities (Nasim et al., 2002, 2006, 2008, 2011). Each method comprises two distinct signals either fluorescence or luminescence which can be monitored in mammalian cells, providing a basis for high throughput format. In this project, we seek to construct a genome-wide map for splicing regulation employing these established approaches and identify novel non-canonical factors including proteins, chemicals and miRNAs that modulate tissue-specific alternative splicing of the human tropomyosin 3 (TPM3) gene. This study will be of substantial use to the study of alternative and aberrant splicing of a wide range of disorders, will greatly enhance the identification of novel drug targets and therapies as well as the development of novel diagnostic tests.

4. Therapeutic resolution of myelodysplastic syndrome (MDS) by modulation of aberrant splicing Myelodysplastic syndromes (MDS) are the most common adult myeloloid malignancy in the UK and approximately 30% of patients will transform to secondary acute myeloid leukaemia (AML), which has a poor prognosis. There is no cure for MDS and current maintenance therapies were all established prior to the realisation that MDS have substantial genetic components. Hence, there is a need to develop a novel therapy which accounts for the biochemical consequences of such gene defects. We have previously demonstrated that heterozygous missense mutations in U2AF1 (encoding U2AF35, the 35 kDa component of the heterodimeric U2 auxiliary factor), underlie the majority of MDS. We have demonstrated that these mutations potentiate overactive splicing and alter downstream gene isoform expression and therefore contribute to abnormal haematopoiesis. Our preliminary data indicate that agents that inhibit this overactive splicing may provide beneficial effects in vitro and in vivo mouse models. The major aim of this project is to develop a targeted chemotherapy for MDS by inhibition of overactive splicing activity of pathogenic nonsense alleles using small molecule agents. In this project we seek to utilise and expand on our preliminary observations to identify small molecule agents capable of targeting U2AF1-mediated splicing defects for selective therapy. Compounds will be identified by means of cell-based and in silico screening and validation will be performed in K562 myeloid cell line models and bone marrow cells derived from MDS patients.

Breast cancer (BC) is the leading cause of cancer deaths among women worldwide, with an estimated 1.7 million cases and > 0.5 million deaths per year. BC is the most common cancer in Bangladeshi women and is predicted to be an increasingly important cause of morbidity and mortality in the next 20 years. To date, no population-based cancer registries or a central registry with comprehensive national cancer data is available. For Bangladeshi women with human epidermal growth factor receptor (HER2), estrogen receptor (ER) and progesterone receptor (PR) negative patients (~25%) have no effective targeted therapies. In addition, it is currently not known whether these patients carry mutations in either BRCA1 or BRCA2 genes as there is no genetic screening system available in Bangladesh. Mutations in other genes such as TP53, PTEN and CASP8 are also found in BC patients worldwide but their penetrance in Bangladeshi populations remains unknown. The major objective of this research is to determine the genetic landscape of Bangladeshi BC patients to inform better diagnosis, prognosis, treatment and counselling.