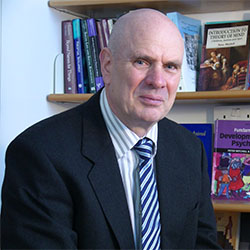 Head of School for Social Sciences

I completed my degrees at the University of Liverpool (psychology, specializing in cognitive development), worked for three years at Birmingham as a postdoc, followed by a lectureship at Swansea, followed by a further period at Birmingham as senior lecturer, followed by a period of several years at Nottingham as professor. I also held posts at McGill (Canada), Oxford and Warwick. I served as Head of the School of Psychology at Nottingham’s UK campus (2005-2009) before taking on the role of founding head of psychology at Nottingham’s campus in Malaysia (2009-2012) and Dean of Science (2010-2014). I have a long-standing involvement with the British Psychological Society (BPS), having served as editor-in-chief of the BPS flagship journal, the British Journal of Psychology (2007-2012), and as chair of the developmental section of the BPS (a role I hold currently). I also have a long-standing involvement with ESRC, a branch of UK Research and Innovation, having served as chief examiner of ESRC’s national PhD studentship competition and latterly as chair of ESRC grant assessment panel A and member of ESRC grant delivery group (2015-2019). I have won nine ESRC project grants to date, either as PI or CI (currently I am PI on one and CI on another). I have a strong commitment to learning, education and the student experience. I am author of a first-year undergraduate textbook on developmental psychology (Fundamentals of Developmental Psychology, published by Psychology Press/T&F) and I led a project on how we encourage our students to utilize mobile devices to optimize their learning.