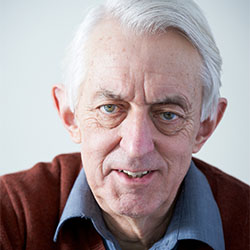 Paul Rogers is Emeritus Professor of Peace Studies at Bradford University and an Honorary Fellow of the Joint Service Command and Staff College (JSCSC).   He has lectured regularly at senior UK defence colleges for almost forty years and has been an External Examiner for the MA programmes at the Royal College of Defence Studies and JSCSC.   Paul lectures on changing drivers of international conflict with particular interests in the Middle East and paramilitary violence, and also has a long-term research interest in the interaction between socioeconomic marginalisation, climate disruption and security.

He was educated at Imperial College and then lectured there, including a two-year secondment as a Senior Scientific Office with the East African Community.   He joined Peace Studies at Bradford in 1979 and has maintained a close connection with the University since then, including periods as Head of Department and Chair of Faculty.   He has also been Chair of the British International Studies Association.

Paul has written/edited 30 books and over 150 papers and book chapters, including Losing Control: Global Security in the 21st Century (London: Pluto, 2010) and Irregular War: New Threats from the Margins (London: Bloomsbury/I B Tauris, 2017).   His most recent publication, “The Triple Paradigm Crisis: Economy, Environment and Security”, will be published in The Journal of Global Faultlines in 2020.   His work has been published in many languages, including Russian, Chinese, Japanese, Farsi, Polish, Portuguese, Spanish and Catalan.

In 2017 he was invited by Springer Nature to contribute a selection of his writings over the past fifty years to their “Pioneers” series which was published in 2019 under the title Paul Rogers: A Pioneer in Critical Security Analysis and Public Engagement (Series Editor: Professor Hans Guenter Brauch).

Paul is a regular broadcaster on radio and TV networks worldwide, averaging at least 150 interviews a year for more than thirty years.   He also writes a weekly column on international affairs for www.opendemocracy.net and a monthly analysis on international security issues for www.oxfordresearchgroup.org.uk.