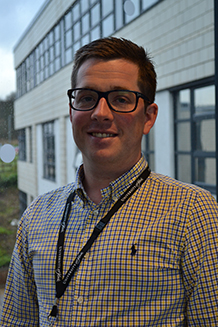 Michael is an associate professor and the professional lead for children and young people's nursing at the University.  He is a children’s nurse, health visitor, independent prescriber and advanced nurse practitioner, and a Fellow of the Higher Education Academy.

In addition to his role at the University, Michael is an Editor of the Journal of Child Health Care (Sage) and a Specialist Advisor to the Care Quality Commission.  In September 2021, Michael was appointed to the Board of Trustees of the International Children's Palliative Care Network (ICPCN), representing the World Health Organization European Region.

He has extensive clinical, teaching, research and leadership experience.  Prior to joining the University of Bradford, Michael was a consultant nurse in children’s palliative and end of life care in a regional children’s hospice.  Within that role he chaired the Yorkshire and Humber Children’s Palliative Care Network Workforce and Education group and sat on the Executive Board, designing and delivering a children’s palliative and end of life care training programme to health, social care and education staff across the region.  He represented children's hospice care nationally in the Association of Chief Children's Nurses.

Michael has worked as a director of nursing, consultant nurse, community specialist practitioner and NHS Commissioner.  Michael has worked in the hospital, hospice and community setting, caring for babies, children and young people, and their families in critical care and those with complex and palliative care needs.  In 2010, Michael was awarded the Queen’s Nurse title in recognition of his commitment to children’s community nursing.

Michael has a Masters in public health and a PhD in palliative care, where he used interpretative phenomenological analysis to explore how grandparents experience the death of a grandchild.  His research interests include children’s palliative care, family centred care, grief and loss, advancing nursing practice and nursing leadership. He has published and presented his research widely, working in collaboration with practitioners, organisations and academics in other institutions.

Michael's research has been recognised by numerous awards, including Researcher of the Year (International Journal of Palliative Nursing) and Commitment to Carers (Royal College of Nursing Awards), for his work with bereaved grandparents, and Enhancing Patient Dignity (Nursing Times Awards), for his work on supporting bereaved families of children who donated organs. Most recently he was awarded The Queen Elizabeth the Queen Mother Award for Outstanding Service Award by the Queen's Nursing Institute, in recognition of his practice, leadership and research in community-based palliative care for babies, children and young people.

Michael sits on the Joint Research Board of Together for Short Lives and the Association on Paediatric Palliative Medicine, leading research on palliative care for children,  young people, and their families across the UK.

Exploring the provision of family centred care after the death of a child, in partnership with Martin House Children’s Hospice.

Developing guidelines for the moving and handling of children after death, in partnership with Martin House Children’s Hospice and Full Circle.