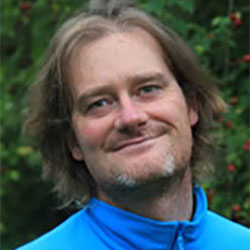 An early love of lens-based media, in particular stop motion animation; led me into me graduating with an animation degree and a career in films, TV and computer games. Have spent most of my professional career following the varied jobs that this offers, from modelling puppet alien heads in Tim Burton's Mars Attacks to fiddling with Bob the Builders bits. I've worked in computer games with first person shooters; to spending a couple of years getting inside Daffy Duck's mind. I now teach at Bradford University.

I have taught animation, photography and digital manipulation for 14 years at Leeds College of Art and Bradford University, so am well versed to deliver and communicate on a one to one basis, or in front of large groups. I'm a qualified teacher and my second degree (from Leeds University) was specifically aimed at teaching adults. I can think of nothing more professionally rewarding than being able to stimulate inspiration in others and witness genuine development. I have a VERY strong conviction that it is my job to create the optimum environment for learning.

This is an award winning animation I directed for the "Digital Working Media Academy" at the University of Bradford. It was for the Optometry department, who wanted an animation aimed at children, to both inform and reduce the anxiety in advance of their eye tests. It was a commercial project designed to give valuable paid work experience to students.

This is an animation I directed with a bunch of talented final year students who spent a few months slaving away on this! A young selfish boy is too concerned about satisfying his desire for pleasure and he disregards the consequences.

Nov 12 LPOTY book and exhibition in the National Theatre

April 11 Article in Photo Radar about "theft of images"

March 11 Article in On landscape "Theft of images"

Nov 09 LPOTY book and exhibition in the National Theatre

Nov 08 LPOTY book and exhibition in the National Theatre