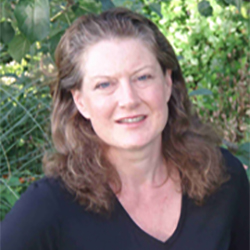 Jill Thompson is an environmental archaeologist specialising in archaeobotany. She works with plant remains from archaeological sites in Britain and Southeast Asia including wood, charcoal, resins, fibres, seeds and cereals and current research is in woodland archaeology.  Her fieldwork has included Sigiriya in Sri Lanka (for UNESCO and the University of Kelaniya; 1981-83), and at Khok Phanom Di in Thailand (for the Royal Thai Fine Arts Department and the University of Otago, New Zealand; 1985) before embarking on a PhD at the Australian National University. Her doctoral research (completed 1992) developed palaeoethnobotanical approaches to early rice cultivation and plant use in and around mangrove swamps. Studies on the taphonomy of rice progressed while Jill was a post doctoral fellow at the University of Otago (1992-94). Since then she has continued research in Asian prehistory with fieldwork in Korea, northeast Thailand, Laos and Malaysia. Jill was nominated for the Baroness Lockwood Distinguished Teaching Award in 2009.

Jill’s research includes vegetation change and plant resource use, including the role of gathered plant foods in the diet and the use of plant products such as resins, medicines, fuels and construction materials. Recent projects include food and fuel supplies for the city of Pompeii, with the Anglo-American Project in Pompeii, and the environmental consequences of charcoal making for iron production around Rievaulx, North Yorkshire. These are allied to studies woodland ecology, modelling coppicing and detecting woodland management through ring patterns in archaeological charcoal, funded by the Nuffield Foundation. Other on-going lab work, supported by the British Academy and AHRC, involves the investigation of wood remains from Niah Cave in Sarawak, Malaysia, including a large assemblage of charcoal, which is being used to infer firewood selection and the vegetation growing locally around the site, and remarkably well-preserved coffin timbers from Neolithic burials in the cave. Jill’s research on crop taphonomy now continues through experimental studies on fungal diseases in charred cereal remains. Her latest fieldwork has been in northern Laos, as part of the Middle Mekong Archaeological Project which is investigating land use changes in central Southeast Asia during the middle Holocene, and includes providing training in archaeobotany to Laos and Thai archaeologists.