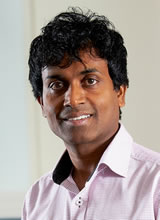 Professor Hassan Ugail was born in Hithadhoo, Addu City in the Maldives. He received his BSc degree with First Class Honours in Mathematics in 1995 and a PGCE in 1996, both from King's College London. He received his PhD from the School of Mathematics at the University of Leeds in the year 2000 for his research in the field of geometric design. He then worked as a post-doctoral researcher at the School of Mathematics at University of Leeds until September 2002.

Prof. Ugail joined the School of Informatics, University of Bradford, as a Lecturer in September 2002. He was appointed as a Senior Lecturer in 2005 and was promoted to a full professor of Visual Computing in 2009. Prof. Ugail currently serves as the Director of the Centre for Visual Computing at Bradford. Prof. Ugail's principal research interests are in the areas of geometric design and visualisation, computer-based physical analysis, design optimisation and machine learning which fall into the broad area of research known as simulation-based design.

One of the focal points of his research has been on a novel method for geometric design known as the PDE method. The PDE method is based on a suitably chosen Partial Differential Equation that enables to model complex shapes in an easy and predictable fashion. Previous studies have demonstrated how the PDE method can describe the surfaces of a wide variety of objects such as aircraft (e.g. Efficient Parameterisation of Aircraft Geometry, NASA grant NAGW-3198), mechanical designs (e.g. Automatic Design for Function, EPSRC Grant GR/L11366/01), and thin-walled structures (e.g. The Optimal Design and Manufacture of Thin-Walled Structures, EPSRC Grant GR/M73125/01).

This research has many practical applications, which include building new application environments for complex interactive CAD modelling and computer animation, design analysis and optimisation for engineering and biomedical applications such as accurate computer modelling of shapes of biological membranes, human heart and artificial limbs, geometry (3D data as well as images) compression and visualisation. His research in this area has led to the establishment of a University spin-out company Tangentix Ltd looking at defining and manipulating complex digital data applied to efficiently deliver computer games online.

There are a number of possible areas of exciting research which stem from this work. Interested visiting scholars and potential postgraduate (MPhil and PhD) students are welcome to contact Prof. Ugail for further discussion (h.ugail@bradford.ac.uk).