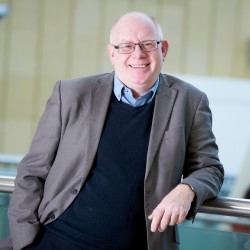 Professor Vincent Gaffney is a world-renowned expert in archaeological landscape studies who has attracted a huge amount of media interest over the past 40 years.

His work around Stonehenge has included creating 3D and virtual imaging of the landscape and included the discovery of a circuit of massive pits surrounding Stonehenge’s larger neighbour, Durrington Walls. His work on the site was awarded Research Project of the Year.

Professor Gaffney - who is Anniversary Chair in Landscape Archaeology at the University of Bradford - has also received recognition for his pioneering work on archaeological landscapes lost to the sea.

He appeared in the Channel 5 and Discovery Science Channel documentary Stonehenge: The New Revelation last year. He has featured in media outlets including The Guardian, The Daily Express, Fox News and on Radio 4’s In Our Time with radio host Melvyn Bragg. His latest book, Europe’s Lost Frontiers, looks at the largest directed archaeological research project in Europe investigating the lost land under the North Sea known as ‘Doggerland.’

View all experts in: Archaeology.