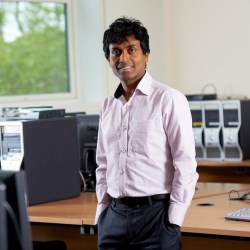 Director of Centre for Visual Computing, Faculty of Engineering and Informatics

Professor Ugail worked with investigative journalism website Bellingcat to identify Russian military intelligence officers associated with the 2018 Novichok poisoning of Sergei and Yulia Skripal in Salisbury by running an automatic ageing model on pictures of the suspects when they were younger.

He has worked with the BBC to identify an alleged Nazi war criminal who had settled in the UK and with the New York Times in identifying suspects in the killing of US-based journalist and critic of Saudi Arabia’s government, Jamal Khashoggi.

He has led research developing a method of ageing facial images that could help in the search for long-term missing people worldwide, and as part of that project, the team progressed the image of Ben Needham, who went missing on the Greek island of Kos in 1991, to show what he would have looked like at the ages of 6, 14 and 22 years old.

Professor Ugail also produced an image of what missing Madeleine McCann would look like on her 17th birthday, in 2020.

View all experts in: Computer science.