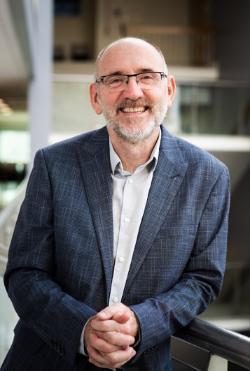 Professor Gaffney is an archaeological geophysicist who formerly worked in the commercial area, including Channel 4’s Time Team TV series.

He studied undergraduate and postgraduate degrees at Bradford, and in 2007 began teaching, gaining his professorship in 2021.

He has conducted research on Stonehenge and Fountains Abbey, and is heavily involved in the Bradford 3D ‘digital twin’ project.

He has undertaken research in Europe, Asia, Africa and the Americas. Significant research projects include work his work as part of the Stonehenge Hidden Landscapes Project, research on World Heritage Sites at Diocletian’s Palace, Split, in Croatia and at Fountains Abbey, UK, the Greek colony at Megara Hyblaea (Sicily) and ancient Cyrene in Libya. More recently he has participated in major projects directed at broader cultural issues including the Curious Travellers project, utilising web-scraping technologies to reconstruct heritage under threat. As well as writing articles for publication in several journals, Chris has authored several books, including Revealing the Buried Past: Geophysics for Archaeologists (co-authored with John Gater) and Magnetometry for Archaeologists.