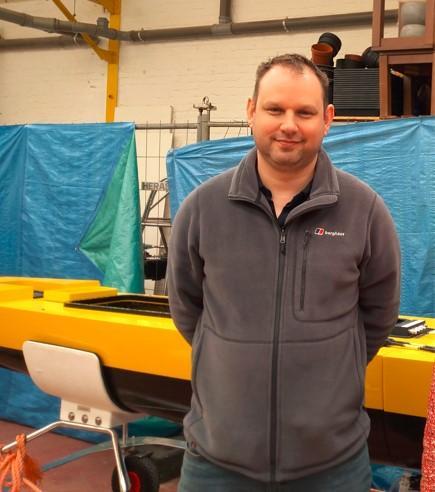 An archaeological study led by the University of Bradford will attempt to find new evidence of human settlements during the last ice age.

The scientific quest - the first of its kind in the world - is being spearheaded by geoarchaeologist Dr Simon Fitch, who will use underwater drones and advanced 3D seismic sensors to create maps of coastlines as they looked between 20,000BCE and 10,000BCE, when sea levels were between 120m to 40m lower than they are today, with the goal of finding evidence of human occupation.

Dr Fitch has been named as a Future Leadership Fellow, and his five-year long ‘Life on the Edge’ project has attracted just over £1m funding from UKRI as well as £400,000 in-kind ship time from VLIZ (Flanders Marine Institute), and a PhD studentship from the University.

He has already worked on several marine archaeology projects, however commenting on this new project, he described it as a “significant first”.

“Our knowledge of the submerged coastal zones of the Late Palaeolithic is essentially non-existent and we have little to no knowledge on the settlement of these areas. This project will represent the first serious attempt to record these landscapes and understand the communities who lived on the edge of the continents.”

“During the last ice age, humans occupied the massive plains that extended far offshore onto the continental shelf. Global warming led to the inundation of these areas, and these now submerged landscapes therefore hold a unique and unexplored record of coastal settlement and colonisation during the period 24,000 to 10,000 years ago (the Late Palaeolithic), which is almost entirely absent from the present day terrestrial archaeological record.

“Yet it is this, currently unexplored area that records how humanity last experienced the challenges of sea-level rise and climate change, and where the evidence for response, including societal innovation and adaptation, are most likely to be anticipated.

Dr Fitch will use advanced seismic sensors to produce 3D data on the coastlines that will allow direct sampling of the landscape, representing a major step change that will revolutionise the information available to understand these enigmatic landscapes and will hopefully provide evidence of its inhabitants and their environment.

The project will examine three different marine environments off the coasts of Scotland and Belgium and Croatia. It is hoped the geophysical data and samples from the study can be used to inform future decisions on climate change and associated sea level rise.

Dr Fitch added: “It is not hyperbole to say this is groundbreaking. This survey will provide significant advances in scientific understanding and the results will be of global importance, as it will vastly improve the methodologies available to investigate the vast inundated prehistoric landscapes that can be found around the world.

“What we find will tell us so much about our ancestors, about how they lived and the landscapes they lived in. I’m very proud to have been named a Future Leadership Fellow and I’m excited to find out what the study will reveal about the lives of our ice age ancestors.”

Dr Simon Fitch is a geoarchaeologist who has a long interest in the study of all aspects of submerged landscapes. His research has research focused upon the study of submerged Mesolithic landscapes and marine archaeology worldwide and the impacts of environmental and landscape change upon human populations during prehistory. Earlier research included analysis of the offshore landscapes of Wales as part of the ‘West Coast Palaeolandscapes Project’, the DEFRA funded Humber REC Project and the NOAA funded ‘Between the salt water and the sea strand’, which comparatively studied the inundated marine landscapes of the North Sea and the Gulf. He is currently leading the seismic mapping component of the ERC funded Europe's Lost Frontiers Project.