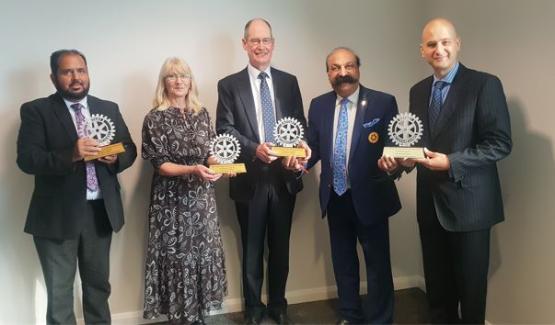 Rotary International Yorkshire and North Lincolnshire District 1040 has recognised work undertaken during the pandemic during a special awards ceremony at the University of Bradford.

Presenting the awards, Dr Manoj Joshi DL, District Governor for Yorkshire and North Lincolnshire Rotary, which represents more than 100 Rotary clubs, said: “When I was first elected, I visited many clubs and found there were so many people carrying out voluntary activities but there was no way of recognising this. So, I initiated these awards, which are the first in the UK and Ireland.

“The University of Bradford has supported Rotary from day one - Shirley as the first female vice-chancellor has supported many new initiatives while leading the University during this very difficult period, giving stability and strength to everyone working here.

He praised Ed Anderson for his stalwart support of individuals and organisations and for modernising the office of Lord Lieutenancy.

He added: “Javed Bashir has brought people of faith together and supported the university in an exceptional manner during the pandemic, so that not only do people do good work together but they also then sustain it.”

Accepting her award, Prof Congdon said: “I remember when we first started the Student Hardship Fund and Manoj was the first person to commit to making a donation, along with Javed.”

Mr Bashir, who teamed up with different faith communities to set up the Volunteering Interfaith Partnership in collaboration with Age UK Bradford & District and Strengthening Faith Institutions, added: “I think Manoj also deserves an award, as he has also taken part in giving out food and winning the hearts and minds of people - providing help and support to people who need it.”