OBE for 'services to pharmacy' for honorary visiting professor 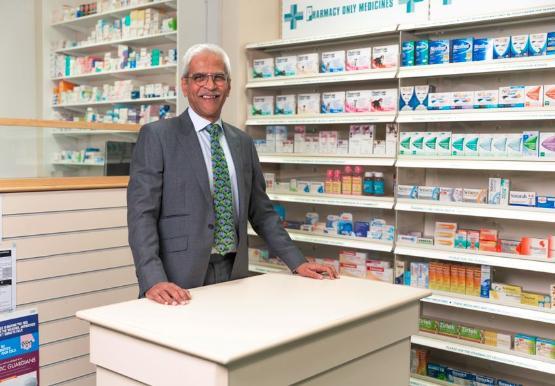 Bradford pharmacist "humbled" to be in 2021 New Year's Honours list

Honorary Visiting Professor at the University of Bradford Mahendra Patel has been awarded an OBE in the New Year’s Honours List for services to pharmacy.

Commenting on the honour, he said: “I am deeply humbled and honoured to receive this award but I am also keenly aware that times are hard for many people.

“Having worked for what seems like such a long time with Covid and having seen the impact of it across generations and demographics, and how it has affected people not just in terms of health but also their livelihoods, it does not feel right to celebrate at this time.

“I see this more as a recognition of the people, the teams and the organisations who have made my journey possible. I feel indebted to all of them, those who have come across my path, inspired me, helped me to learn and helped me reach places I never thought I would go.”

Prof Patel was born and raised in Little Horton, Bradford, where he also attended school. He graduated from the University and went on to open a community pharmacy in the city. He later engaged in research and was awarded his PhD in 1996. He helped in the accreditation of the new Master of Pharmacy degree programme at the University of Huddersfield, where he worked for 10 years.

He is a visiting professor at a number of institutions, including the University of Sussex, Birmingham City University, Universiti Sains Malaysia and he is Adjunct Professor at Wilkes University, Pennsylvania, USA.

He has ardently served the Royal Pharmaceutical Society (RPS) as elected national pharmacy board, assembly member and treasurer - he later received a fellowship as recognition of his outstanding contributions to the pharmacy profession and further went on to be awarded the RPS President’s Charter Award in 2016 . He also led on developing its national policy for type-2 diabetes with Diabetes UK.

His pioneering work developing the NICE National Student Champions Programme has become a mainstay in over 40 university medical, dental, nursing and pharmacy faculties, leading him to become the first pharmacist to gain a fellowship from NICE in 2013.

Mahendra, who now lives in Wakefield, is an on-going advisor to British Heart Foundation and its various national steering committees. His early work with them led to developing a national educational tool kit, the Healthy Hearts Tool Kit, which received the BMA Patient Information Award in 2010. His work with the South Asian Health Foundation involving community outreach work in the prevention of type-2 diabetes helped in them receiving the BMJ Team Diabetes Award in 2016.

His work with the Lebanese Pharmacy profession in supporting pharmacy education in Lebanon and bringing together an international partnership agreement between the Lebanese and UK pharmacy    professions resulted in him being appointed as International Lebanese Honorary Ambassador to the Lebanese Order of Pharmacists in 2018.

He is also a Faculty and Teaching Member to the United Nations Educational, Scientific and Cultural Organisation's (UNESCO's) Department of Education's International Programme of the UNESCO Chair in Bioethics, and has won also won national acclaim for his voluntary and charity work with the British Heart Foundation, he was made the first Global Ambassador by the University of Bradford.

Mahendra is also the first international fellow of the Indian Pharmaceutical Association - his work has involved sharing and promoting good pharmacy practice and helping create ‘antibiotic guardians’, and he is a patron of the Commonwealth Pharmacists Association.

His most recent work has seen him act as one of the national leads for the PRINCIPLE and PANORAMIC trials, run by Oxford University - both trials seek to pioneer repurposed and new drug treatments in the community to prevent hospitalisation due to Covid.

* Please use hashtag  #ImHonoured when promoting on social media.