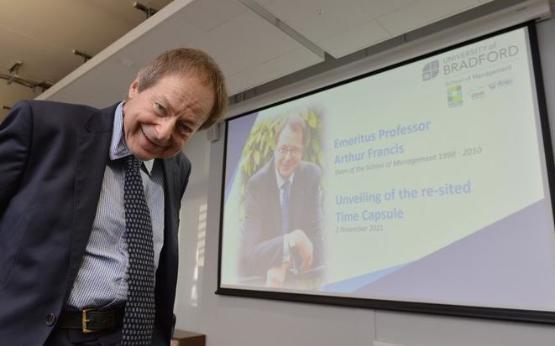 Time for a more sustainable future

A time capsule linked to the University of Bradford’s School of Management, originally buried over 20 years ago, has been re-buried, following the sale of its former resting place.

The capsule was first buried on the Emm Lane campus on June 22, 2001 by then Dean of the Faculty Prof Arthur Francis, and there it was meant to remain until 2063, the year which will mark the centenary of the business school.

The sale of the 14-acre site earlier this year - prompted in part by its high maintenance costs - led to its removal and reburial. Its new home is marked by a plaque just outside the campus-based Bright Building, which is where the School of Management relocated.

During the ceremony, Vice-Chancellor Prof Shirley Congdon said it was poignant the time capsule was being reburied outside a modern, highly sustainable building.

She said: “As we reflect on the passage of time, it’s important to remember the firm foundations that have been created for the business school, while also recognising that moving from Emm Lane to the Bright Building is a step towards greater sustainability. The underlying message is that while business is still about profit, it’s also about being responsible and accountable, and bound up with that are the themes of social inclusion and social mobility, which are at the core of everything we do.”

Prof Amir Sharif, Dean of the Faculty said it was important for the School of Management to retain its premier status, adding: “We have so much opportunity in this city and region, we’re involved in so many things, both with the community and with business.”

The contents of the time capsule have remained secret and will only be known when it is unearthed in 2063.

University of Bradford’s School of Management has been shortlisted for Business School of the Year by the Times Higher Education (THE) Awards 2021.

The University’s School of Management is world renowned - it was the first business school to be jointly accredited by AMBA and BGA in England and in February this year, its MBA was ranked No.1 in the world for value for money by the Financial Times.

The Bright Building incorporates a number of sustainable design features. The £6.5m part EU-funded building, designed by Leeds-based architects Farrell and Clark, achieved a Post Construction BREEAM (Building Research Establishment Environmental Assessment Methodology) credit score of 95.2%, the highest BREEAM score for a University Building in the UK at the time, surpassing the adjacent BREEAM Award-winning ‘The Green’ Student Accommodation, which achieved 94.95% in 2012.

Picture on this page: Dean of the Faculty Prof Arthur Francis