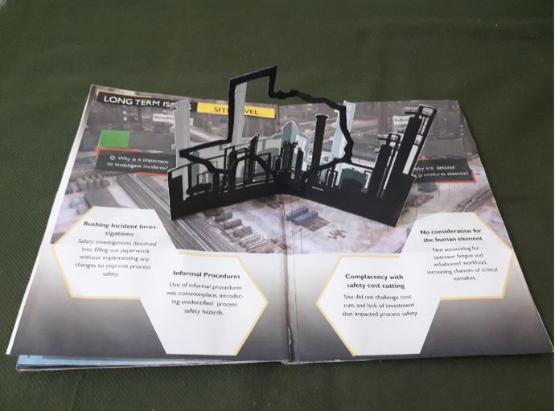 A team from the University of Bradford has scooped first prize in a global competition for its innovative analysis of the 2005 Texas City Refinery disaster, which killed 15 people and injured 180 others.

The team included: Kalokson Gurung, Laya Jayadeep, Janusz Siwek, Satyam Vora and David Zhou, all from the Faculty of Engineering and Informatics.

As part of the module on Reliability and Safety Engineering, the Bradford team conducted a thorough analysis of the causes of the disaster, which was caused following the leak of highly flammable gas.

They also extrapolated information to see what lessons could be learned from the incident, creating a novel pop-up book.

The team were awarded the SIESO (Shared Information and Experience for Safer Operation) Medal for 2020 after winning the IChemE global competition for the best analysis and presentation of a major accident and its learning outcomes. The work will be published as part of the Loss Prevention Bulletin of IChemE.

Kalokson Gurung, former president of the University’s Chemical Engineering Society, said: “Our entry was based on the Texas City Refinery explosion which happened in 2005. We had to essentially produce two pieces of work. Our idea to depict the disaster was through an interactive pop-up/pulley book concept which showed the root causes of the disaster, from boardroom decisions to the explosion.

“During the lead up to the competition the pandemic occurred which meant that we had to work around not having face to face communication.”

An IChemE spokesperson said: “The judging panel were impressed with [their] written article and innovative pop-up book depiction… and agreed that [the] entry was a worthy winner.”

Martin Priest, Dean of the Faculty of Engineering & Informatics, said: “I am delighted to report that a group of our final year Chemical Engineering students has won the prestigious SIESO medal.”

The University of Bradford’s School of Chemical Engineering was ranked 4th in 2020 The Guardian University guide league tables (only Cambridge, Imperial and Nottingham ranked higher) and has been in the top five for the last four years.

A written analysis of the disaster will be published in Loss Prevention Bulletin in October.