Kate Swann is the Chancellor of the University of Bradford.

She was officially installed in February 2016, in the University's 50th anniversary year.

She became the formal head of the University of Bradford, in succession to sportsman and politician Imran Khan who stepped down from the post in November 2014.

She began her career at Tesco in 1989 as a graduate trainee and later held a number of senior marketing roles within retail at Homepride Foods, Coca Cola and Dixons Group. She graduated from the University of Bradford with a degree in Business Management in 1986, and was awarded an honorary degree from Bradford in 2007.

In 2006 she was named one of the 50 most powerful women in business by Fortune magazine. 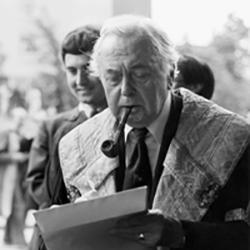 In a widely-quoted speech made before he became Prime Minister, Harold Wilson emphasised that the future of Britain was being forged "in the white heat of technology", and to bring this about it was necessary to educate many more scientists. His close involvement with the University of Bradford as the first Chancellor was one of the ways in which he helped to make this a reality.

He guided the University from its inception in 1966 until it became one of the country's leading technological institutions, respected nationally and internationally.

Throughout his 19 years as Chancellor, Lord Wilson rarely missed the degree congregations and personally conferred over 21,000 degrees.

He was invariably present at major functions and impressed many by the depth and breadth of his knowledge of the University. 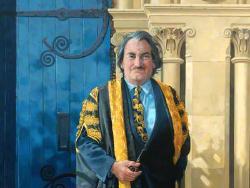 Sir John Harvey-Jones was much more than just a figurehead.

He was a strong supporter of universities in general and of the University of Bradford in particular. He believed that Britain's well-being depended on the success of its industry which, in turn, relied upon a successful technical education system.

As Chancellor, Sir John succeeded both in raising Bradford's public visibility while at the same time offering valuable support and advice to the University's management during the financially-difficult late 1980s.

He will be remembered in the University of Bradford for his far-sighted advice that helped to establish the administrative structures and policy for the years which lay ahead. 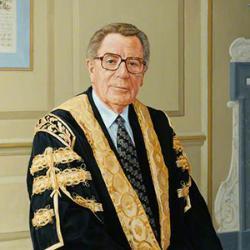 Sir Trevor Holdsworth, former chairman of National Power and of the Bradford-based Allied Colloids international chemical business, was installed as Chancellor on 24 March 1992.

Bradford-born, Sir Trevor is a distinguished businessman who cherishes his local roots. He believes that invention and innovation are at the heart of wealth creation and economic prosperity, and was proud of the University's reputation for 'Making Knowledge Work'. Sir Trevor is a firm believer in the importance of lifelong learning.

Knighted in 1982, Sir Trevor has appreciable talent as a pianist, and could have risen to international fame in this area had he not chosen a business career.

The University is eternally grateful that he chose the latter. 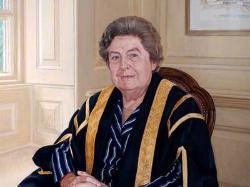 On her appointment as the University's fourth Chancellor in March 1997, Baroness Betty Lockwood said, "Education is one of the most precious things in life both to the individual and to society as a whole, and as Chancellor I hope to continue to promote that belief in many ways".

Baroness Lockwood had a non-traditional route into higher education having left school at 14 then studying at night school before winning the Mary Macarthur Scholarship for Working Women to Ruskin College, Oxford.

Since 1983 when she first joined the University Council and throughout her Chancellorship, Baroness Lockwood has vigorously supported the University's widening participation strategy, ensuring that higher education is accessible to all.

This has led to Bradford's pioneering and successful track record in raising participation levels, particularly from traditionally underrepresented groups.

Baroness Lockwood's political career to date has been groundbreaking. She was appointed as the first Chairman of the Equal Opportunities Commission in 1975, a post she held for eight years, and was founding Chair of the EU Advisory Committee on Sex Equality.

Baroness Lockwood has been an active life peer since 1978 and a Deputy Speaker of the House of Lords since 1989.

Patron of the Born in Bradford project.

The Baroness Lockwood Award for Distinguished Teaching was set up in 2005. 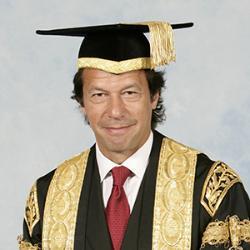 Imran Khan was born in Lahore, Pakistan, where he was educated and proved to be a fine cricketer. He made his first-class test debut for Lahore at the age of sixteen and was selected for the Pakistan cricket team in 1970, where he soon made a permanent place for himself.

He finished his high school education at the Royal Grammar School in Worcester where he excelled in cricket. He went on to study Economics and Politics at Keble College, Oxford, in 1972, and was captain of Oxford's cricket team in 1974.

During the Seventies, Imran became a world-class all-rounder and was rewarded with the captaincy of the Pakistan cricket team in 1981. He was declared international cricketer of the year in 1989-90 and led Pakistan to numerous victories all over the world, clinching the World Cup in 1992.

Imran retired from cricket in 1992, and moved into Pakistani politics in 1996, launching the Pakistan Tehreek-e-Insaaf (the Pakistani Justice Movement).

In 1996 he opened the Shaukat Khanum Memorial Trust (SKMT) Cancer Hospital in memory of his mother who had suffered from the disease. Today SKMT is one of the leading institutions for free cancer treatment in the world and has received international recognition.

Imran is also amongst a number of actors, artists, singers and sports figures who donate their talents to advocate for children on behalf of UNICEF as Special Representatives. He has supported health and immunisation programmes in Bangladesh, Pakistan, Sri Lanka and Thailand.